The Royal 500 represented the “top of the line” for Zenith pocket transistor radios and was extremely popular with the public. Their cabinets were made of an “unbreakable” nylon (instead of plastic) which allowed it to hold up better to use over the years. They were known for their superior performance and the early ones were powered by seven transistors when most other radios used only 4 or 5. These 500’s were designed to be powered by 4 inexpensive AA penlight cell batteries which made them economical to operate in comparison to the more expensive battery types of other radios.

One of the nice features about collecting Zenith Royal 500’s is the fact that they all use penlight (AA) batteries that are easily found today. Many will still function well today after over 60 years of service, however many would benefit from a tune-up and some new capacitors.

Many other early transistor manufacturers used cells that are either expensive or obsolete today, or have “stopped working” so those radios now are good only for display. For the collectors who enjoy taking a step back in time while listening to their classic, I recommend that you choose a Zenith Royal 500. After all, why not get the top of the line? They are fairly easy to find in good operating condition and fairly inexpensive to obtain. An average example of most of these models can be found on eBay for between $40 – $80 with nice examples easily topping $100. 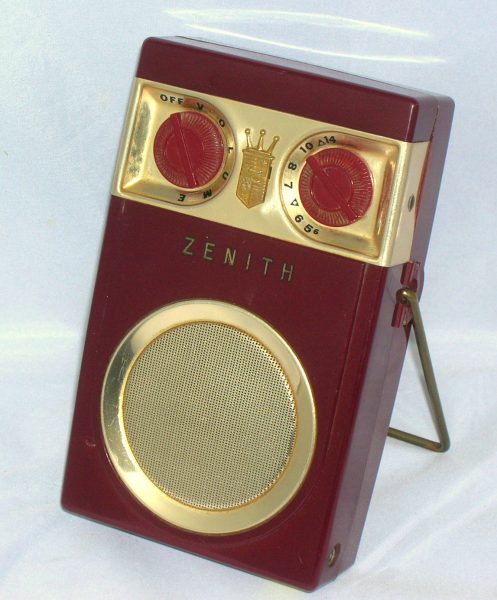 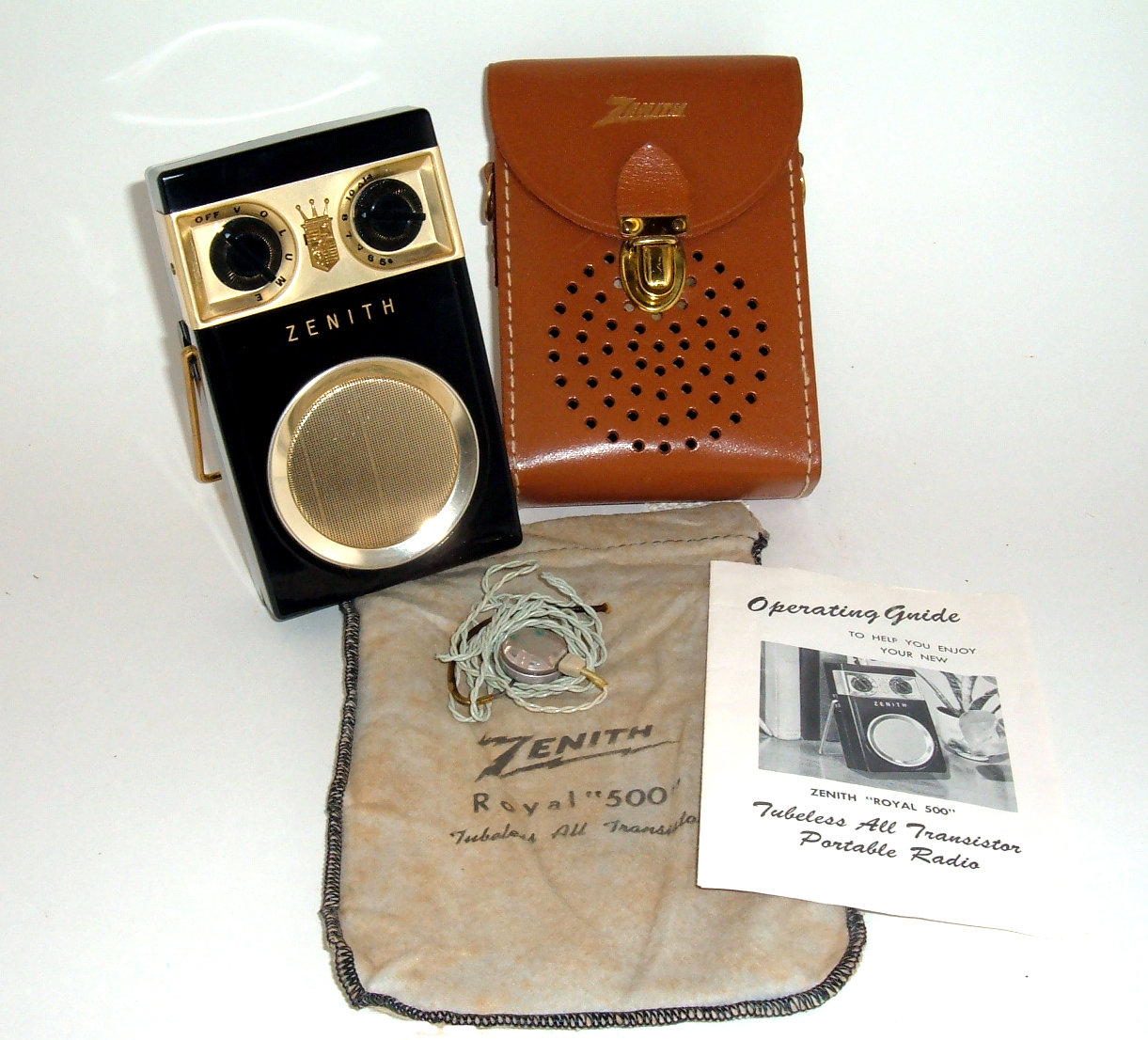 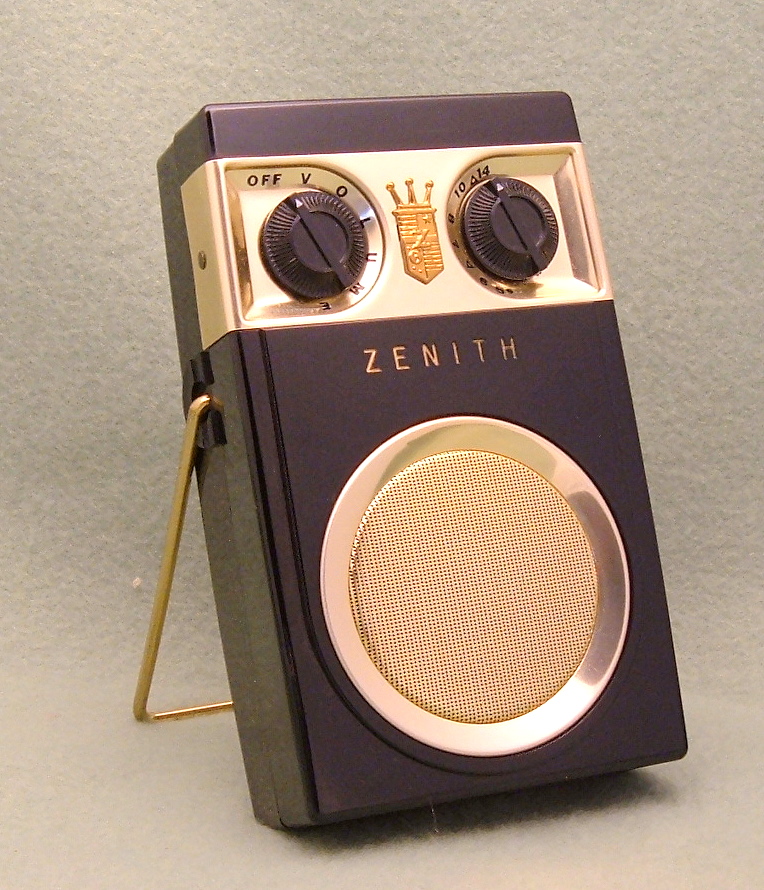 NOTE: Some early examples of the Maroon hand wired 500s came with a semi see-through (translucent) cabinet. It is not known how many of these were made, but it appears that these were the minority and collectors place a premium on them. 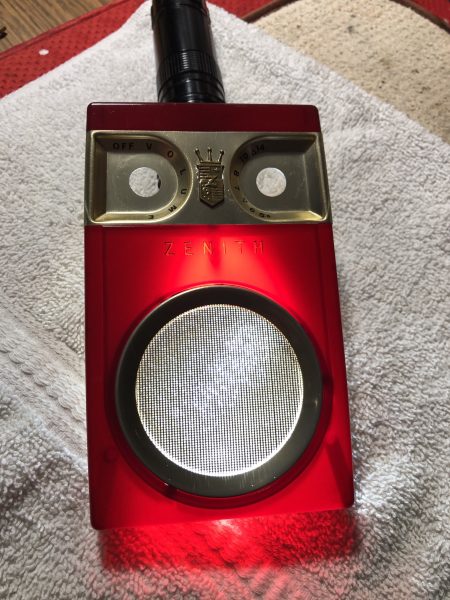 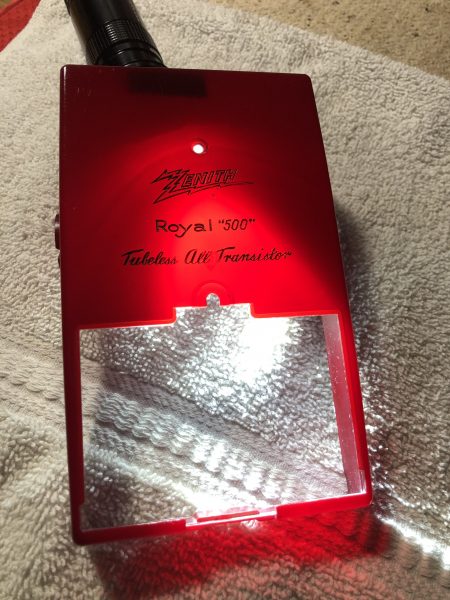 The Royal 500B – mid 1956 With the success of the Royal 500, the high demand made it necessary to find a way for faster production. So Zenith switched to the printed circuit boards as many other manufacturers were doing. Also, early feedback was that the small knobs were hard to use, so larger knobs were introduced. Three new colors were added to the Ebony and Maroon colors: White, Tan and Salmon (Pink). These three new colors are considered special by collectors and are always in higher demand. But it is safe to say that any early Zenith Royal 500 in excellent condition is in high demand. The suggested retail price remained at $75.00 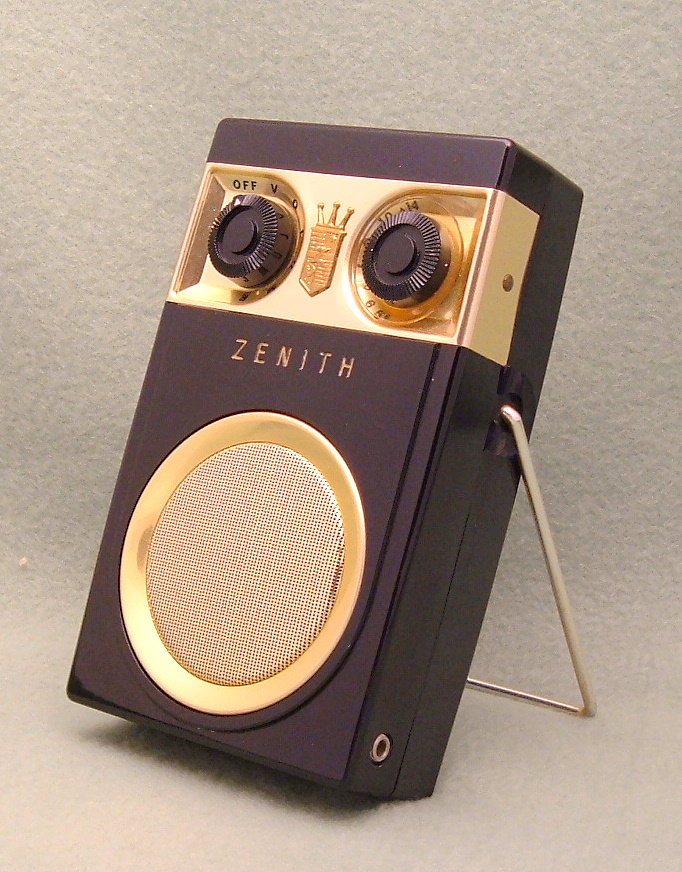 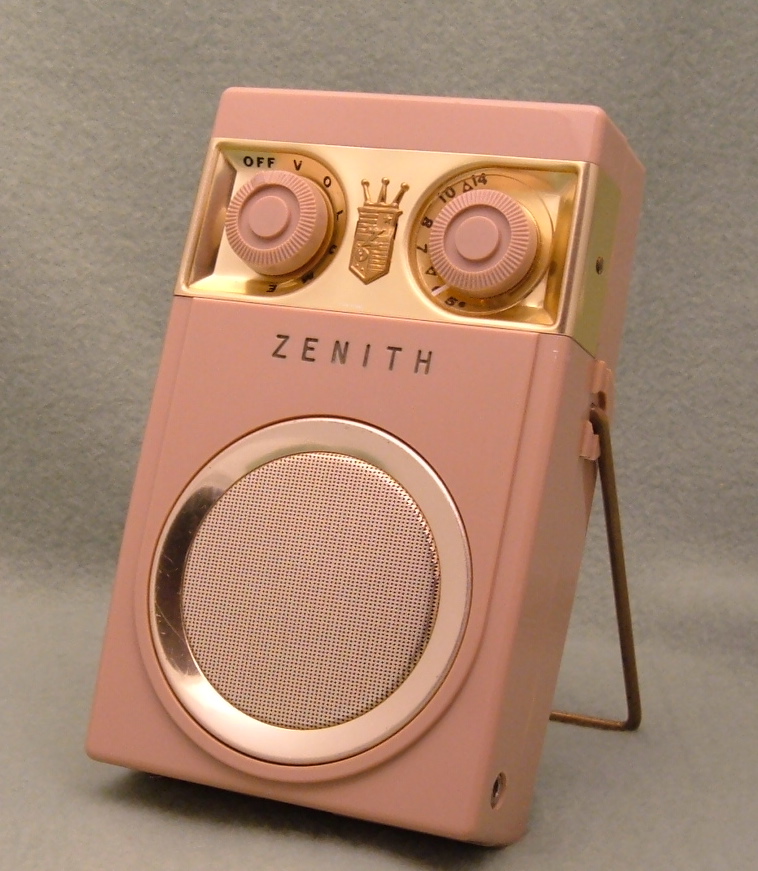 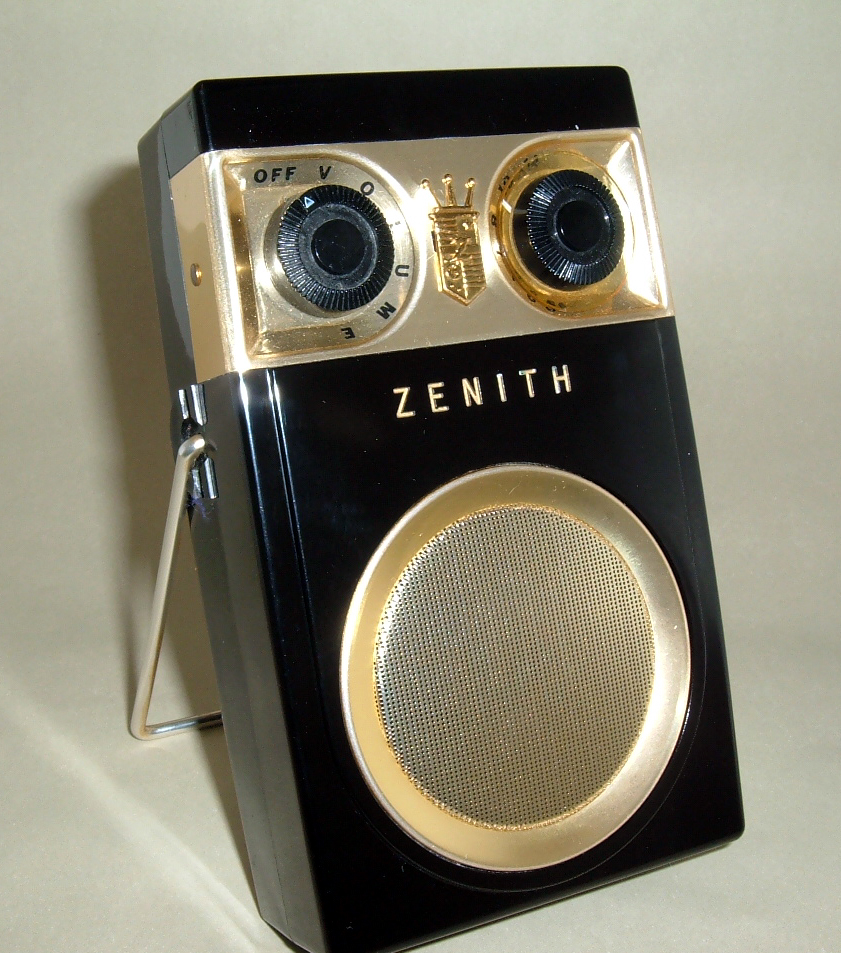 The Royal 500D – 1957 An 8th transistor was added along with other chassis enhancements and so was the Long Distance designation. The very first ones had black lettering on the dial shields……….. 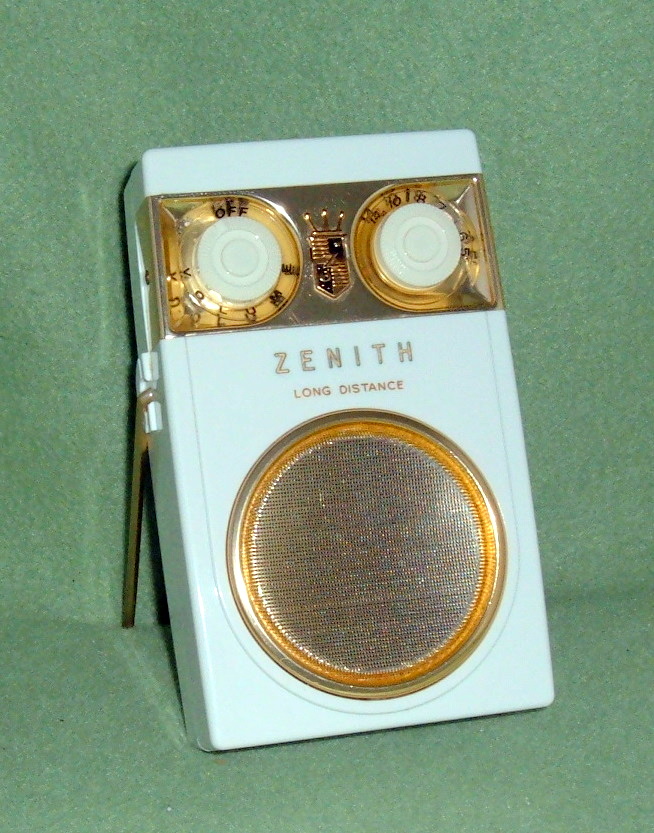 ………..but much more common are the ones with white lettering. 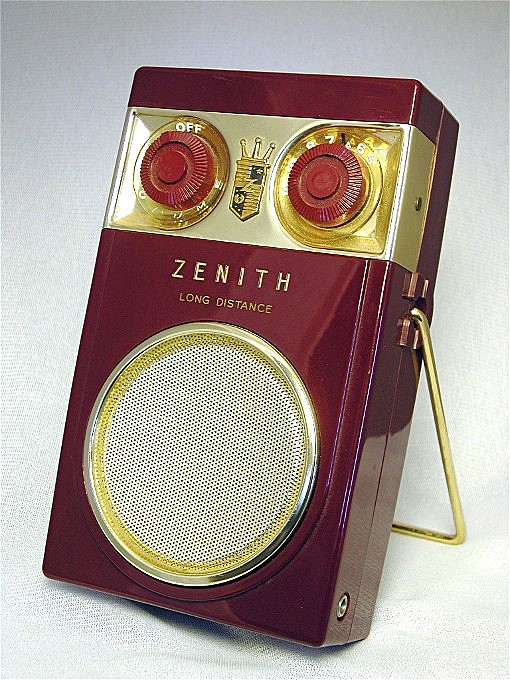 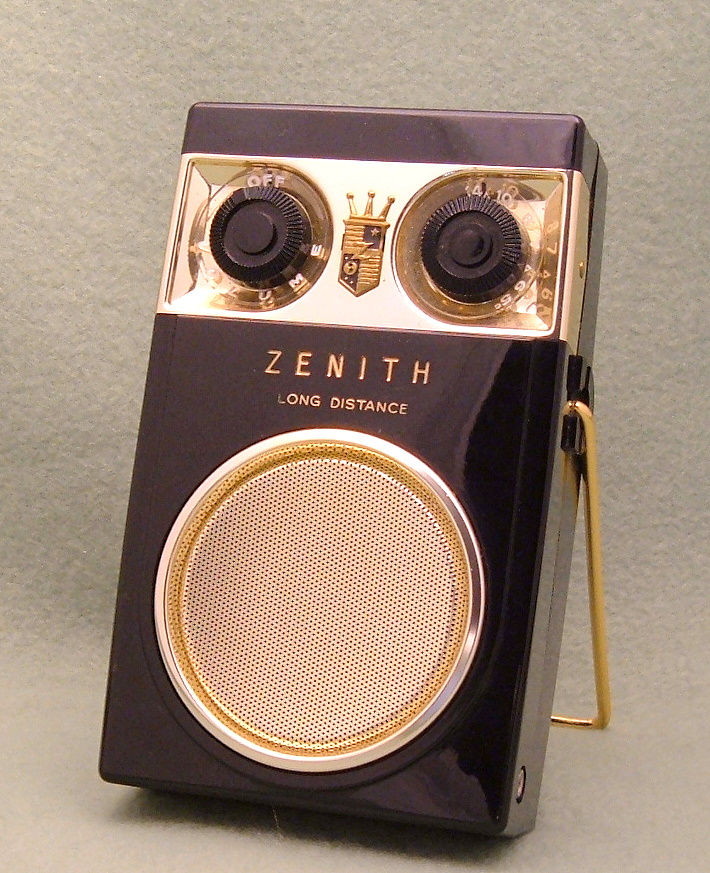 Enhanced 500D –1958 A final enhancement to the 500D came in late 1958 when the grill changed from concave to convex to allow room for a new expanded range speaker. The 500D lettering was also added to the metal face and the crown badge above it was reduced in size. 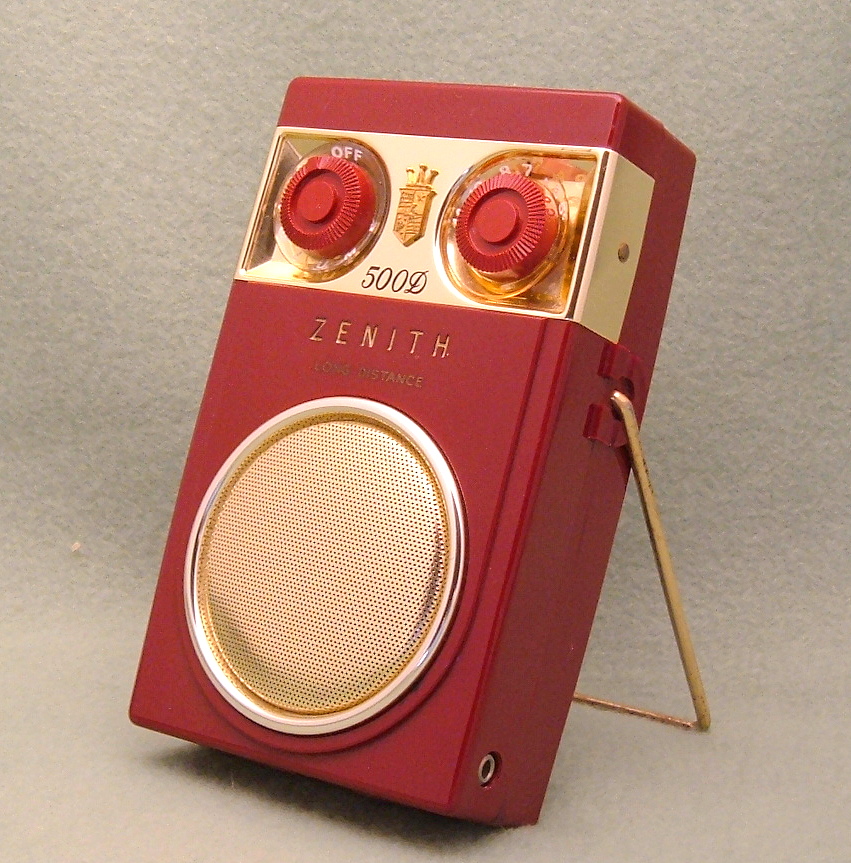 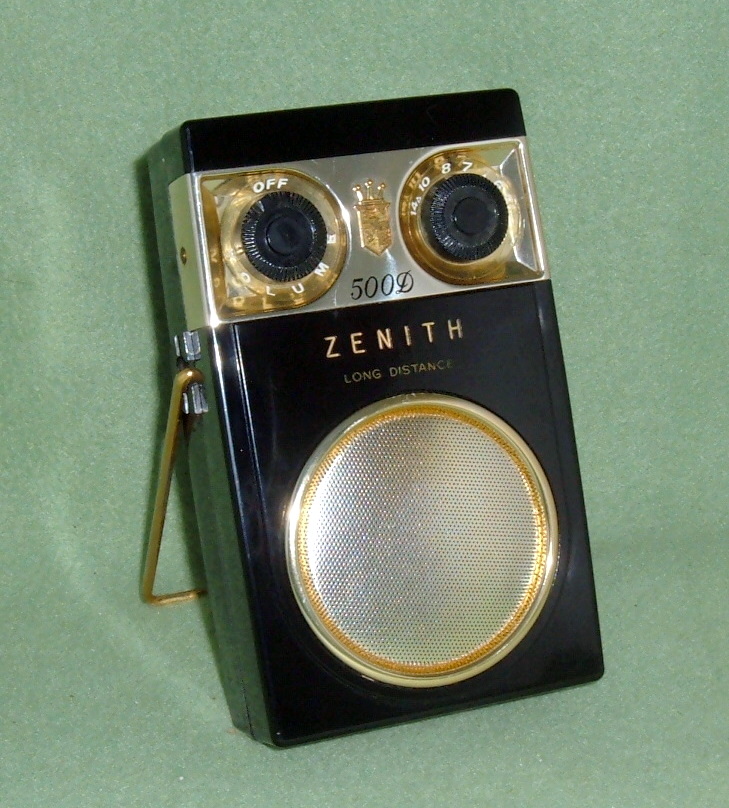 Royal 500E – Late 1959 A new look for the “Owl Eyes”. Same great long distance chassis, but these are hard to find in nice condition because the gold plating around the knobs did not hold up well. These were offered in Maroon, Ebony, or White. The suggested retail price was reduced from $75 to $59.95 for this model. 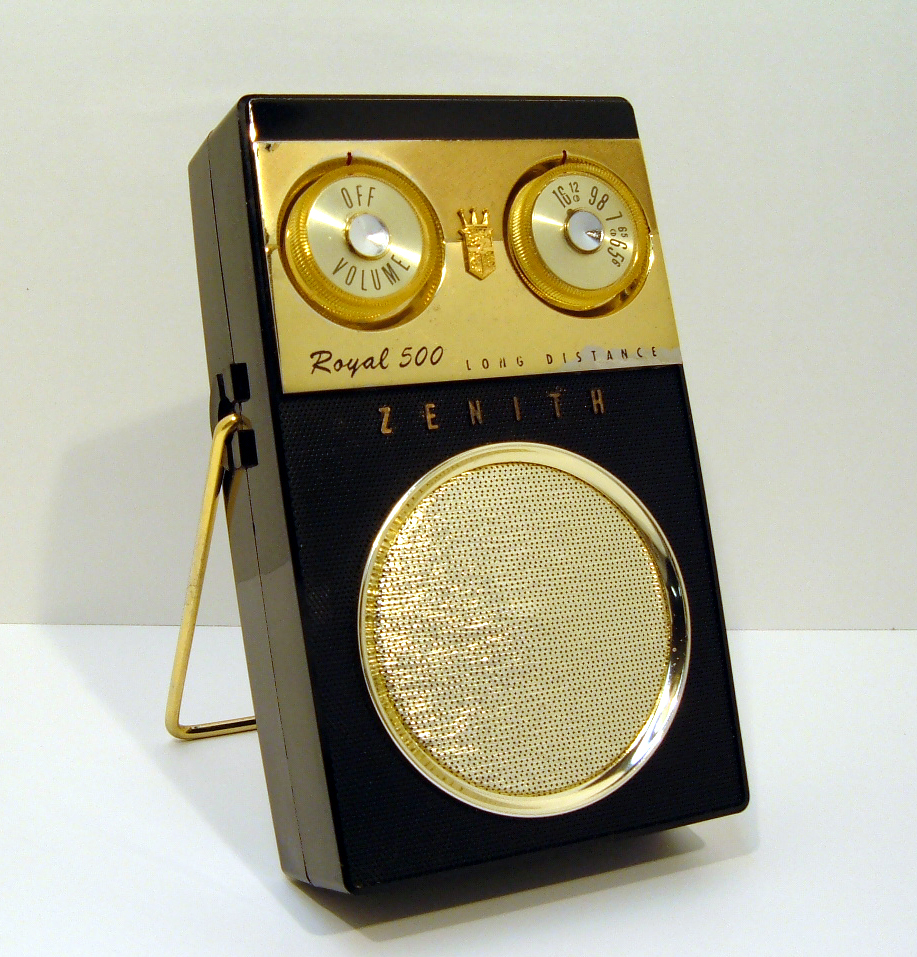 Some were made as a two-tone radio with a White front and a Brick Red back. 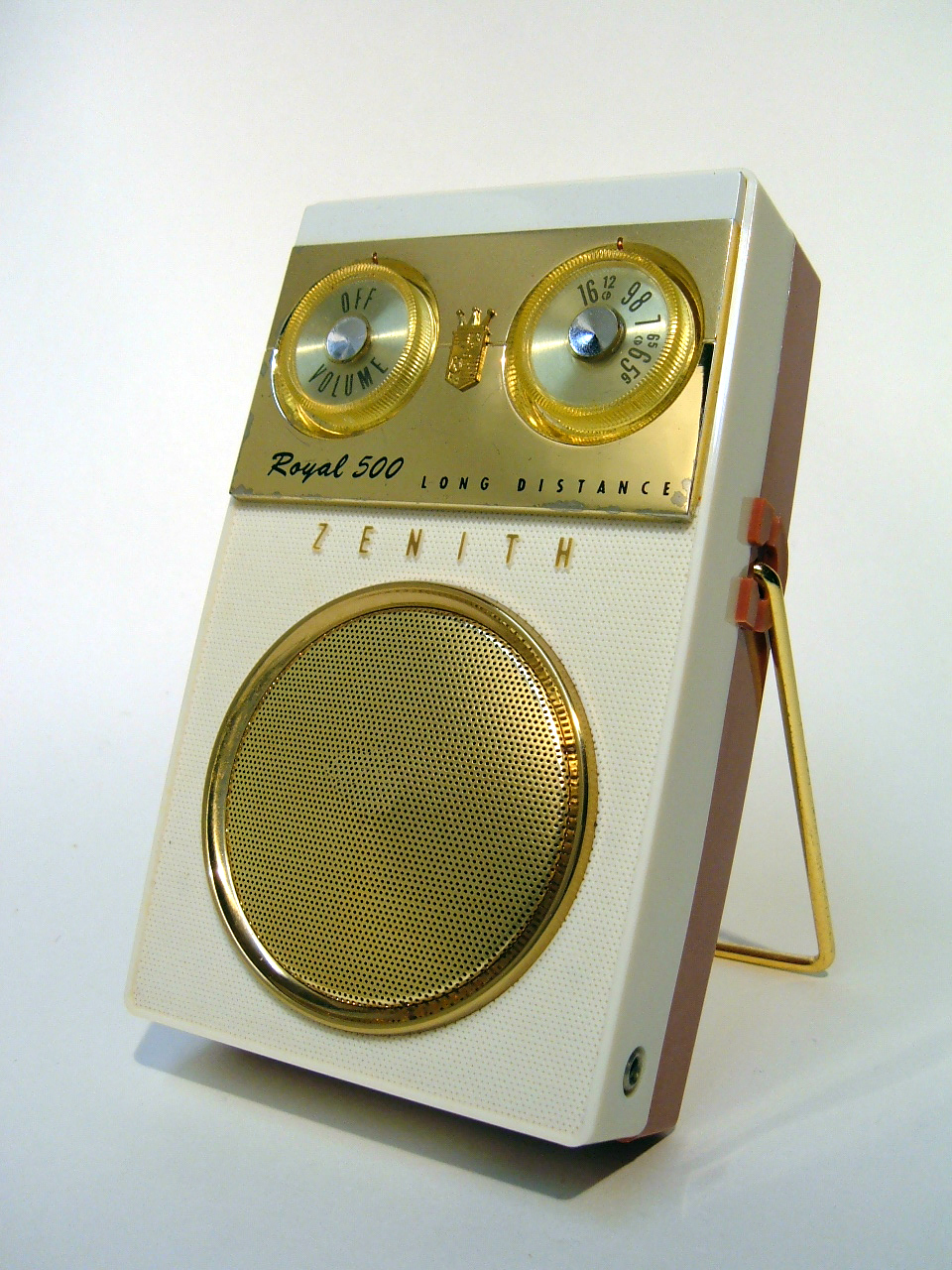 The Royal 500H – 1961 This all new innovative transistor radio would set a whole new standard for performance in pocket radios. With a large 3″ x 5″ expanded range speaker that featured an off-set coil and innovative large ceramic magnet, it was capable of producing crisp highs and deep lows for a listening experience not hear before in a pocket radio. It was offered in Ebony, White, and two-tone Blue/Gray as for some reason, Maroon was dropped from the line. Suggested retail price was $59.95. 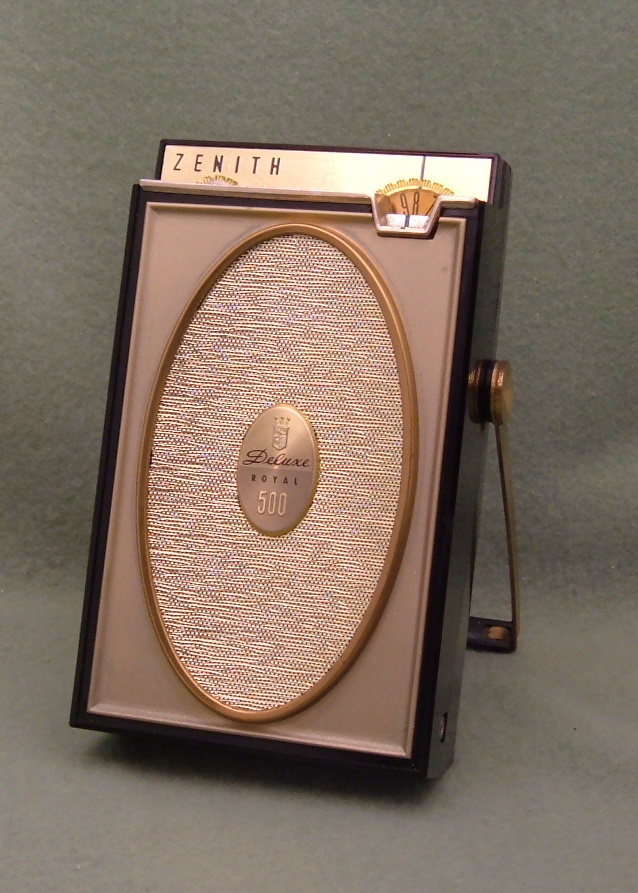 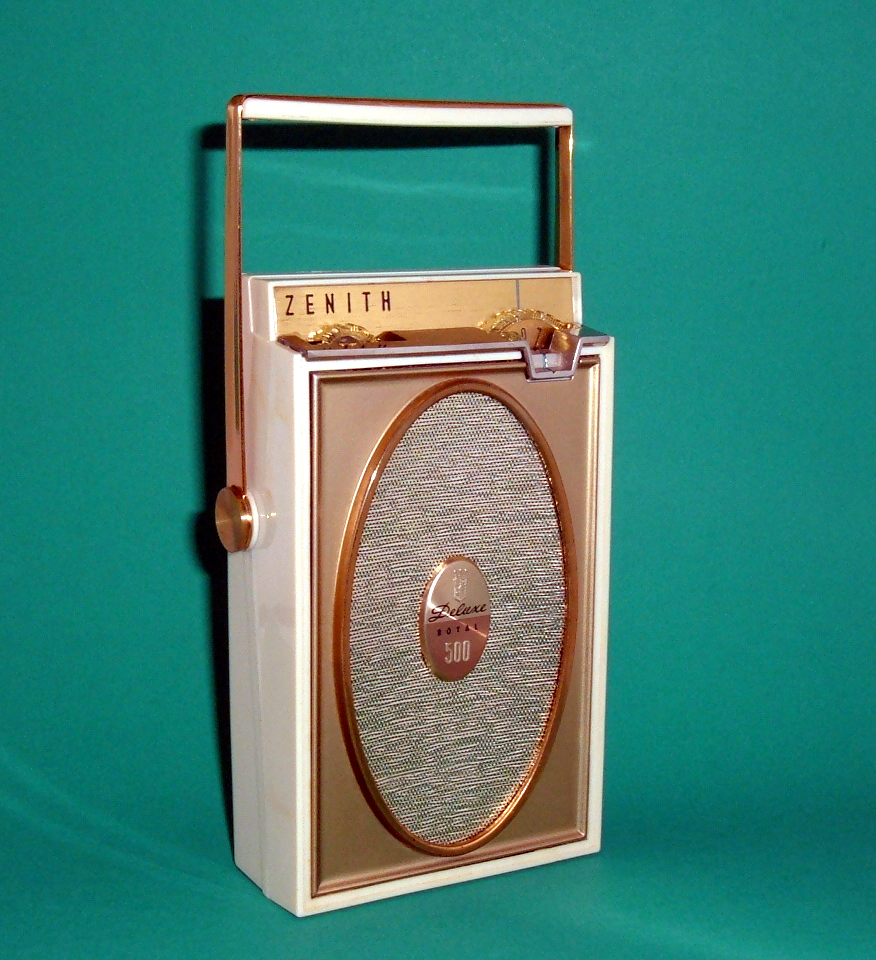 Royal 500L– 1964 The Royal 500 Model L was introduced in 1964 and it was a real step backwards for the 500 series. Although still a sharp looking radio, the output fell back to 100 milliwatts, the speaker was reduced in size, and the quality of sound suffered. Zenith decided to change to a slide rule style tuner replacing the direct drive to the tuning capacitor. This model sold for $39.95 and came in three colors: Black with a gold grill, white, and I have also seen a few in light green. 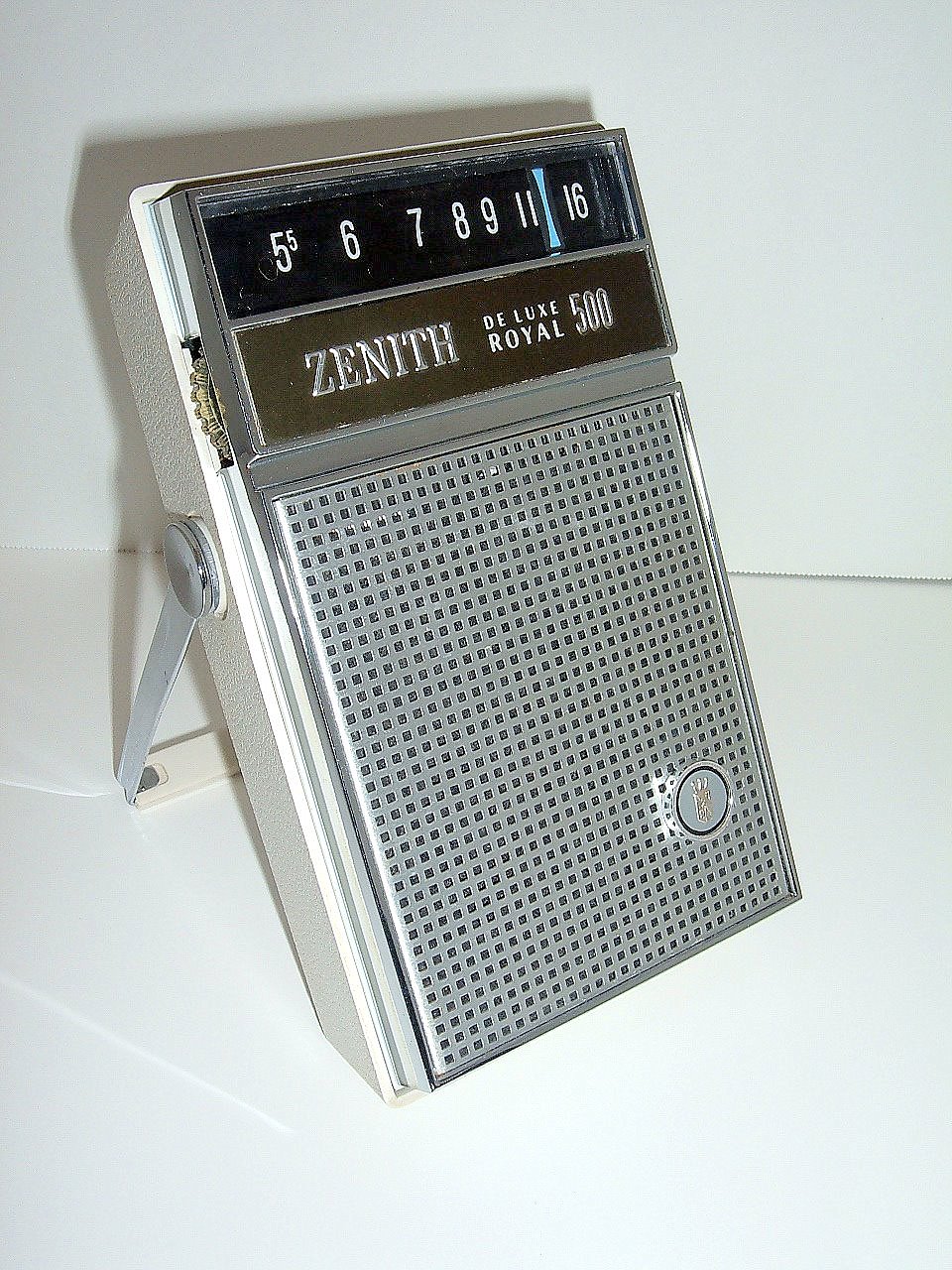 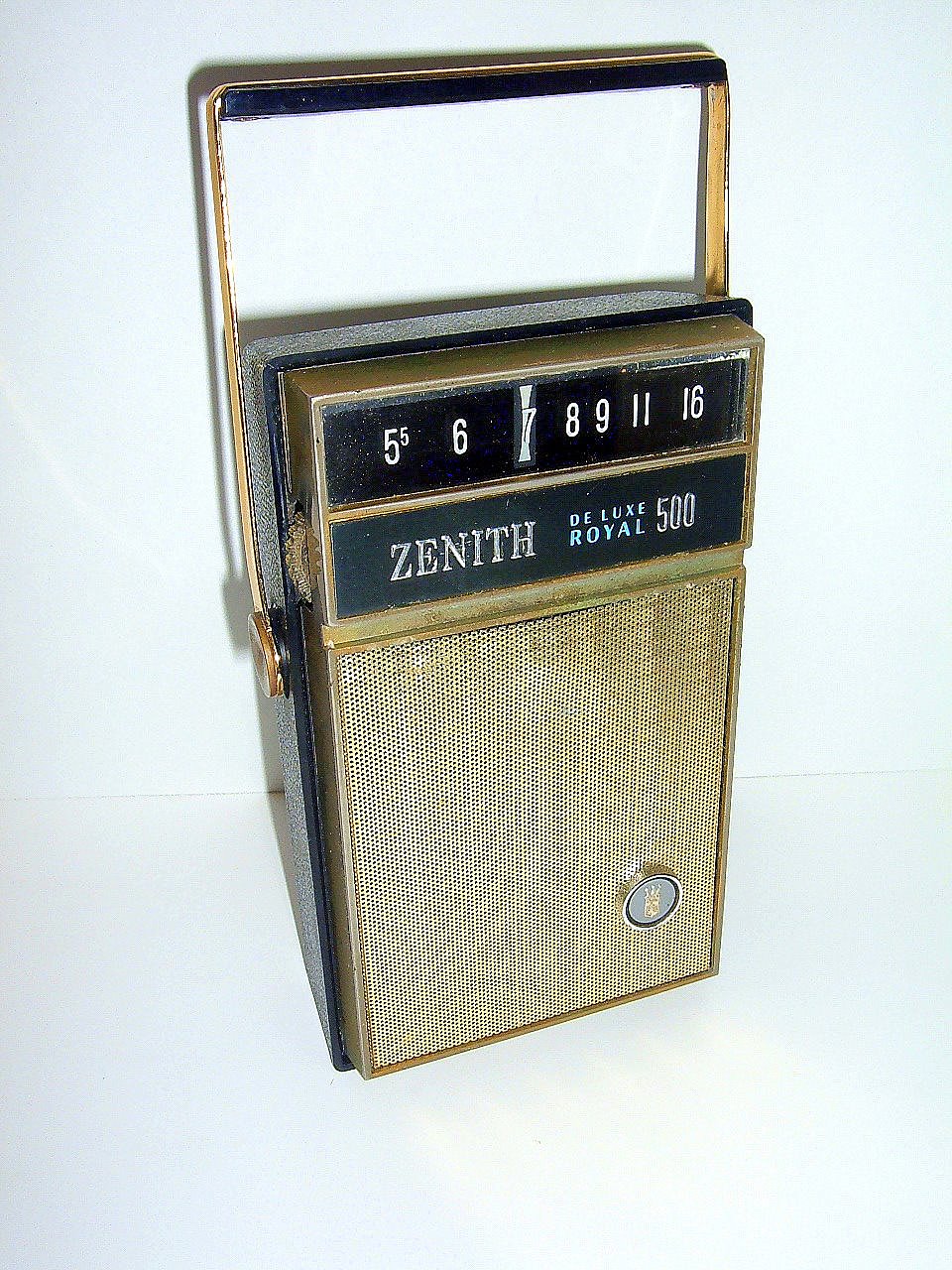 The Royal 500NG – 1965 The final chapter of the fabled Royal 500s was written with the totally different model N-G. I do not know why they named it that, but maybe because compared to the previous Royal 500, this one was Not Good. It was cheaply put together and performance took a big step backwards as the output was only half of the model H. Needless to say, this one is not sought after by collectors, except maybe as a filler to complete the 500 line. Sad way for this legendary product line to end. It did feature a lighted dial though by pressing the button on the lower right which was kind of nice. There was also a similar version of this radio designated as the Royal 555G and named the Sun Charger. It looked the same except for the solar panel mounted on hinged arms above the radio. This unique radio was capable of operating in one of three ways: AC power cord, 4 AA batteries, or with direct sunlight. The suggested retail price of the Sun Charger was $59.95 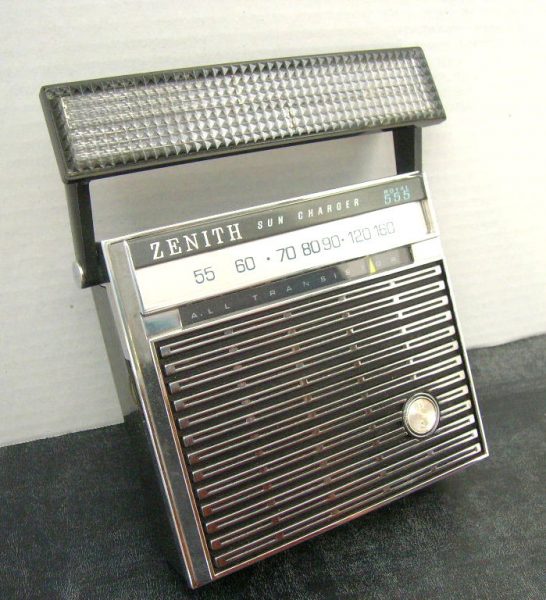 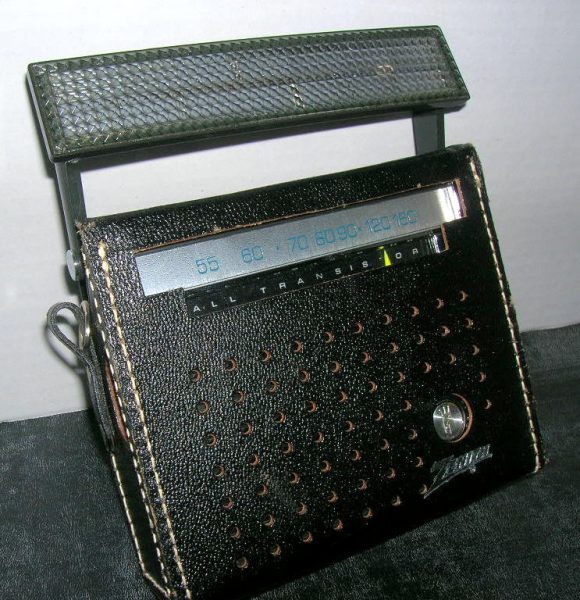