The Royal 50 family consists of three generations that were produced from 1960 through 1963. They represented Zeniths entry into the smaller 6 transistor shirt pocket sized radios and was their answer to the sets coming out of Japan like the Sony TR610 and the Hitachi 666 both of which started in 1958. 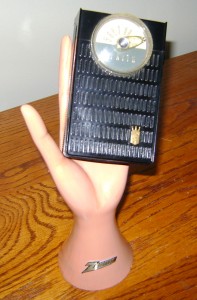 The Royal 50s offered great sound quality for their size and were built with high quality components that allowed them to stand up to years of use. They produce 80 milliwatts of undistorted sound  They are powered by 2 AA batteries and measure 4.25 tall, 2.5 wide, and 1.25 deep and with batteries weighs less than 9 ounces.

The Royal 50 – Zenith’s First Shirt Pocket sized transistor – Introduced in 1960 This produced tone quality unlike other similar sized shirt pocket radios.  It has 6 transistors and was offered in a variety of colors:  as pictured below:  Charcoal Gray, Red, white or Tan with an antique white back, or a Black Beauty with a black back. Some examples received a quality label on the back as shown. Suggested price was $29.95 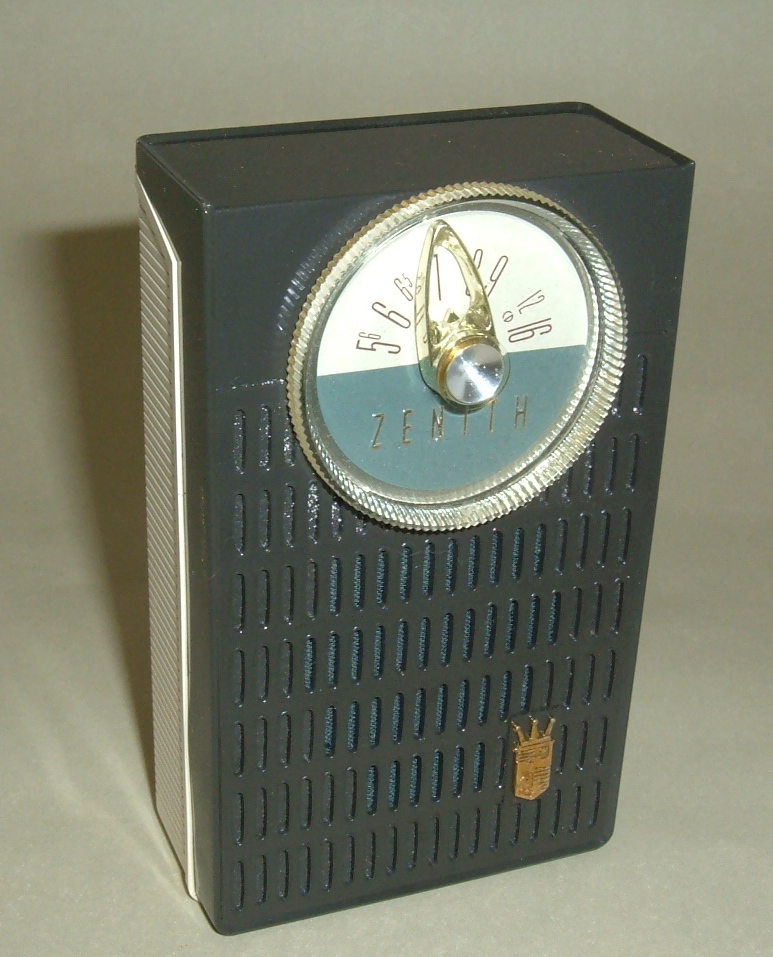 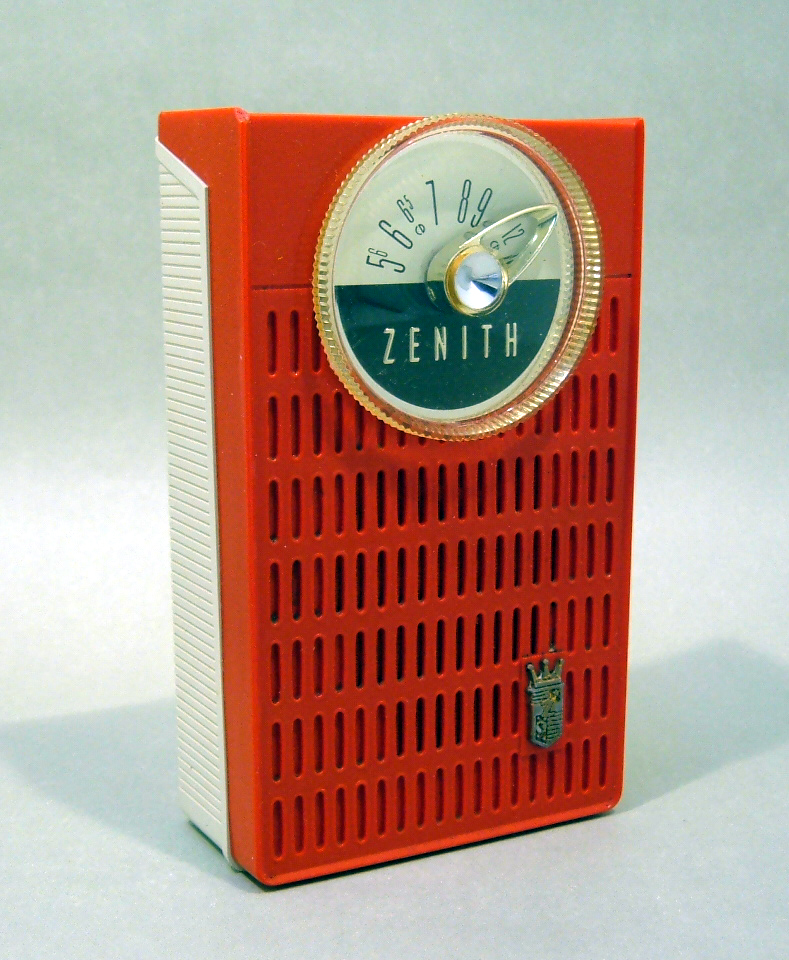 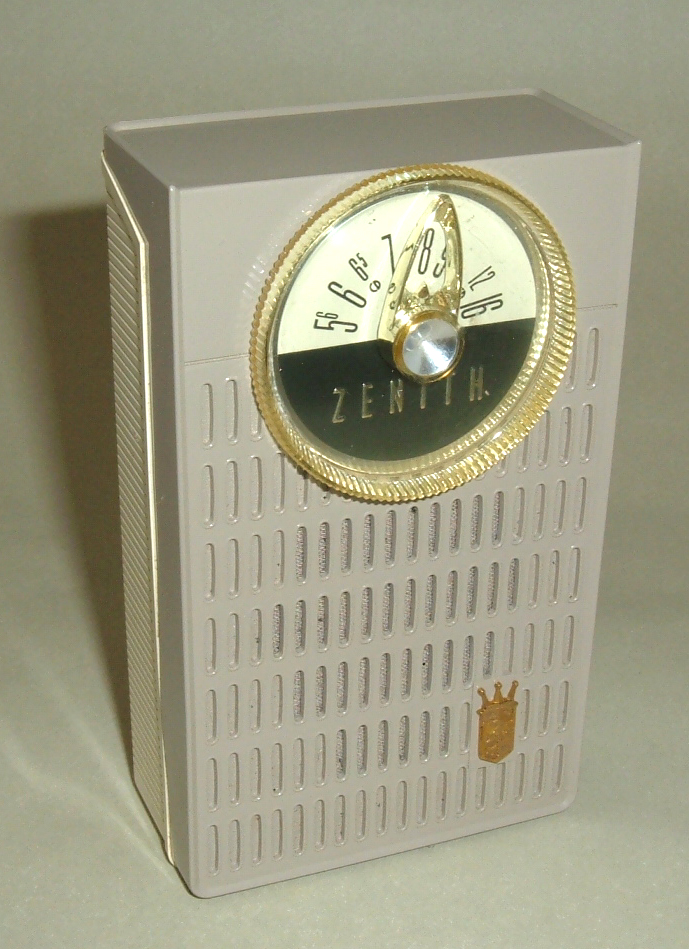 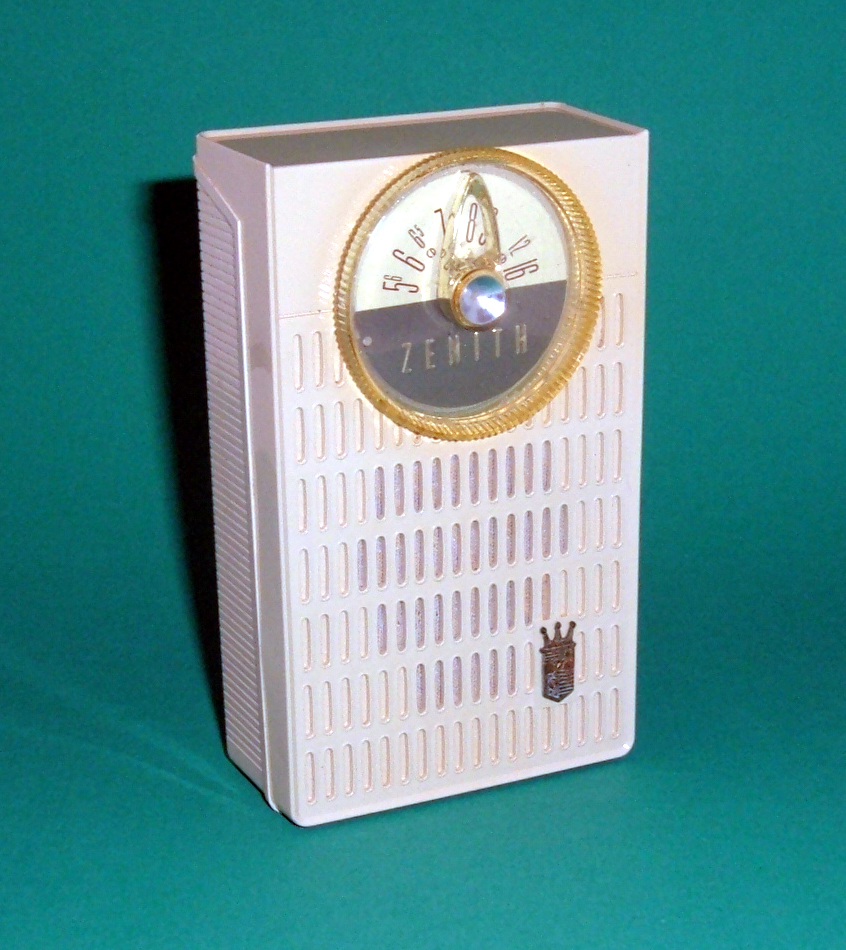 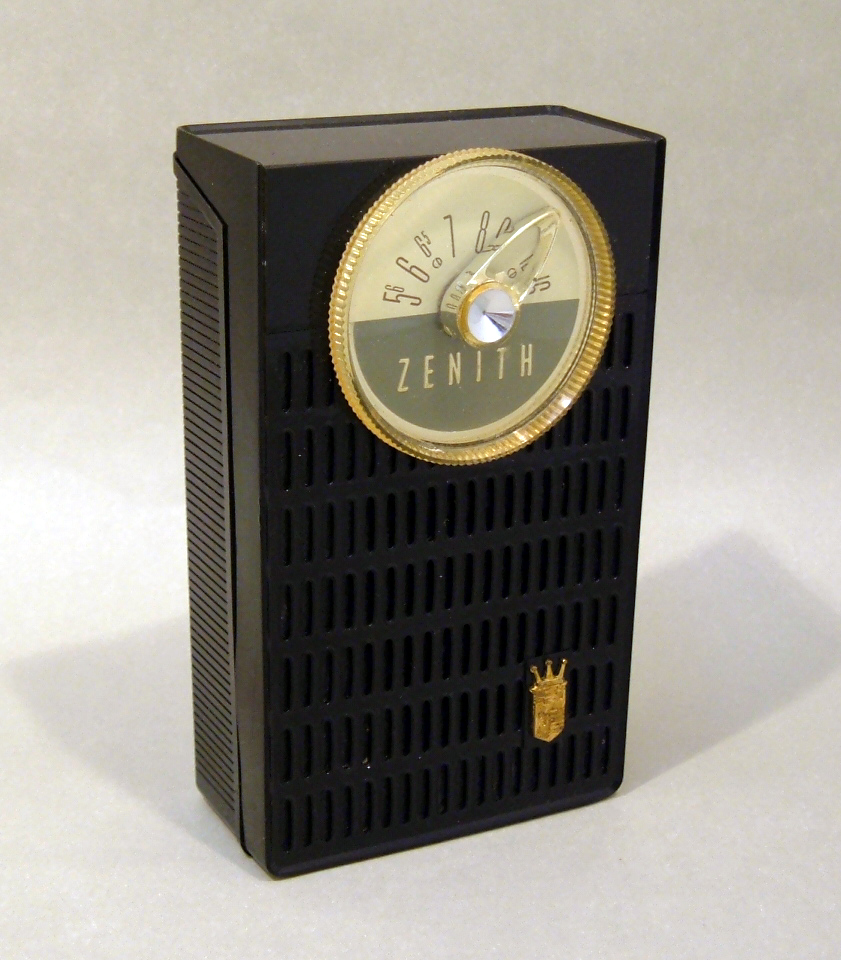 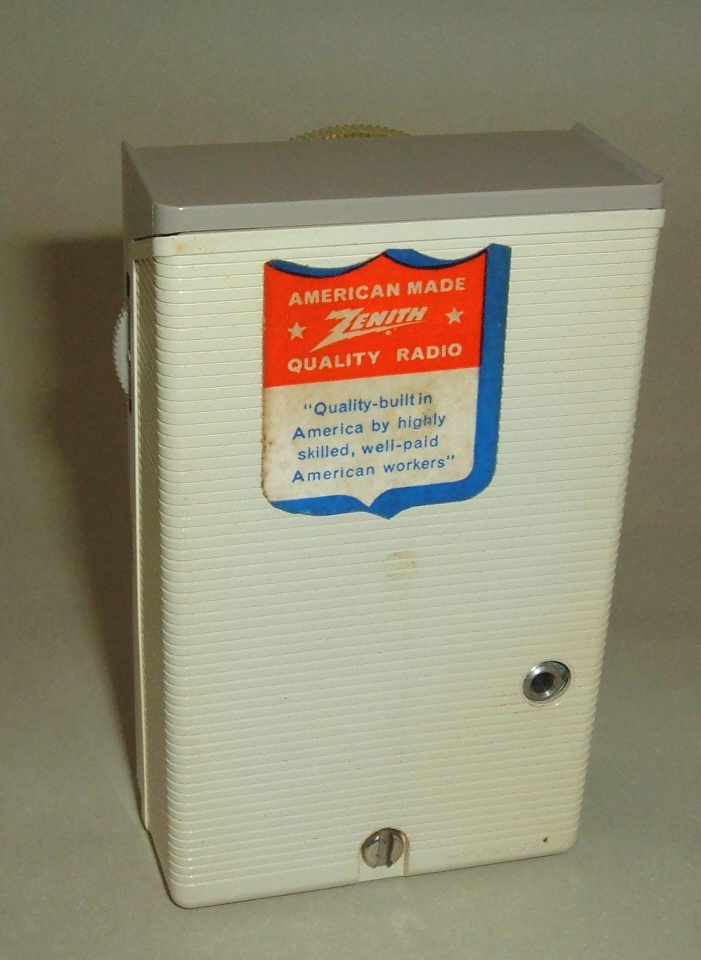 The Royal 55C Converta – A shirt pocket radio also used as a table radio? Sure why not? All you need is a speaker box containing a larger speaker and better acoustics. Hitachi made one for their Model 666, and Toshiba also had one for their “Cats Eye” radio.  I have also seen one done for the Grundig pocket radios. So Zenith introduced their version in 1960, and it worked quite well, but like the others, it was short-lived making them quite rare and hard to find today.  This set was only offered in Charcoal Gray and the suggested price was $39.95 – $44.95. 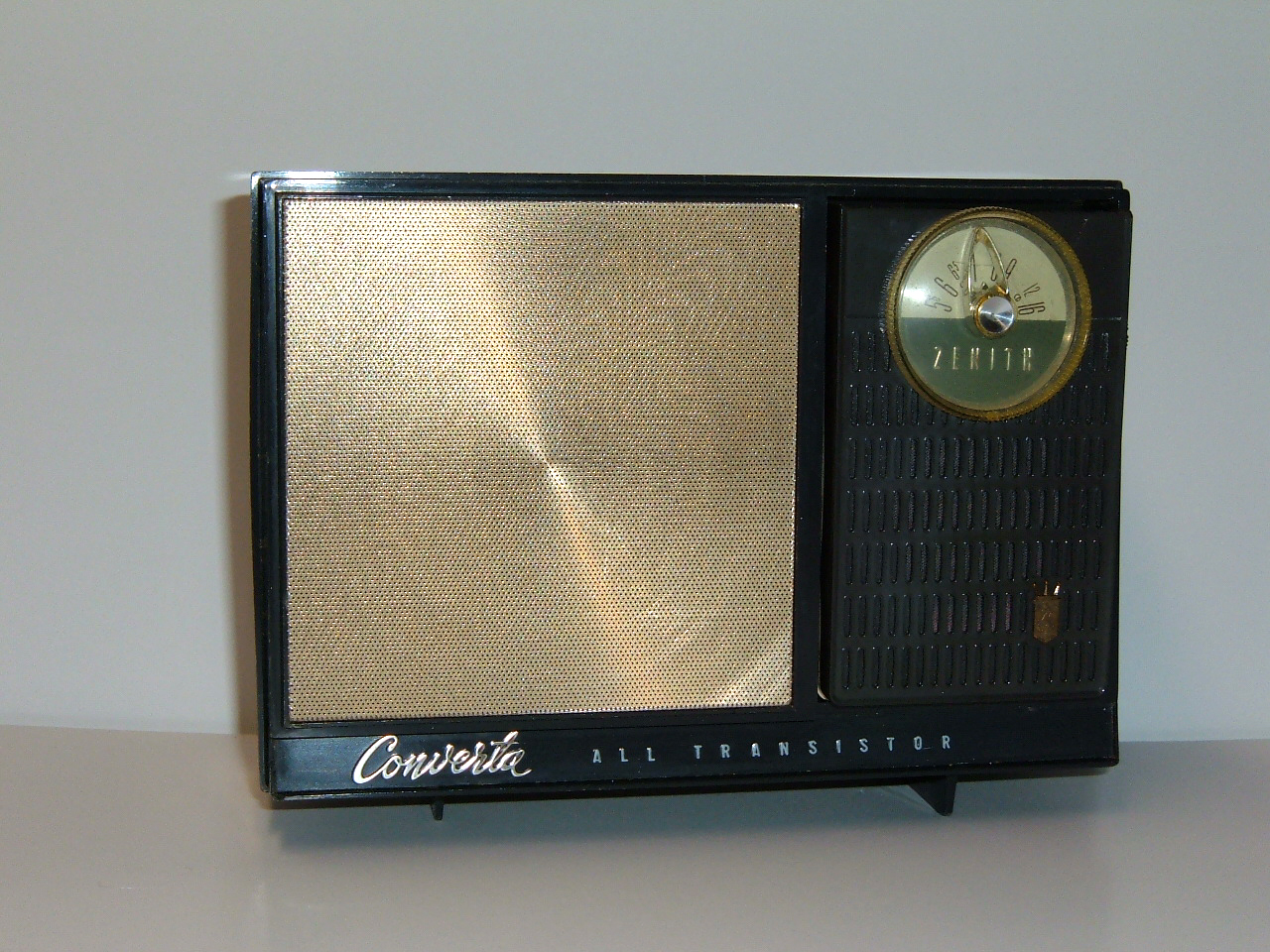 The Royal 50H – Introduced in 1961 these were just like the first Royal 50 except for the added metal trim which added to their handsome appearance.  The challenge today is finding one that has not had any corrosion to the metal parts.

The second generation Royal 50s were offered in the same 5 color combinations.  The suggested price dropped to $26.95 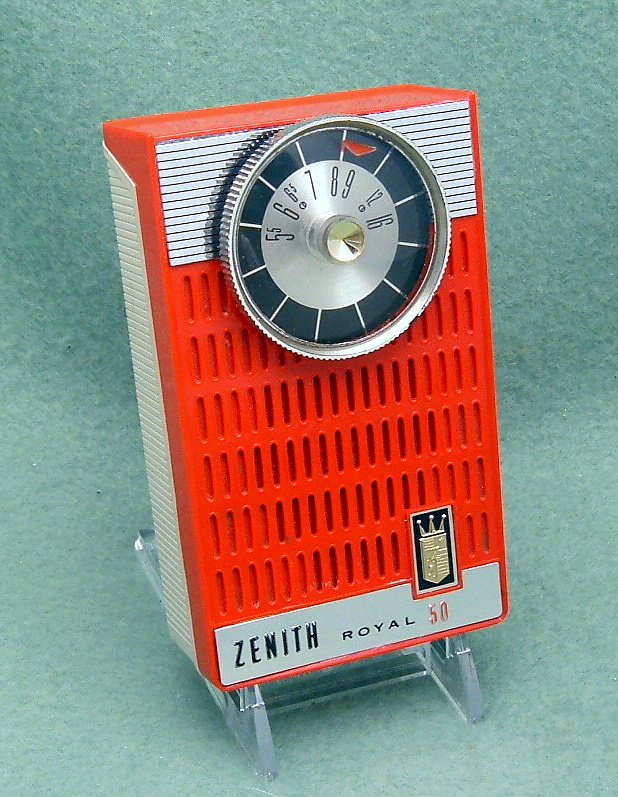 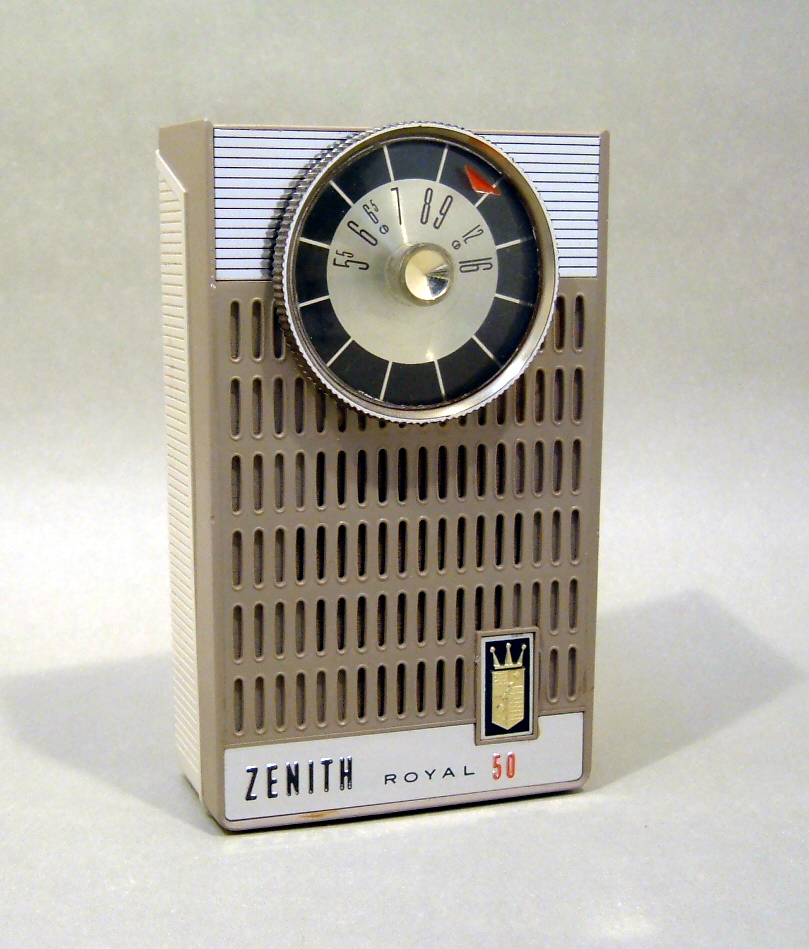 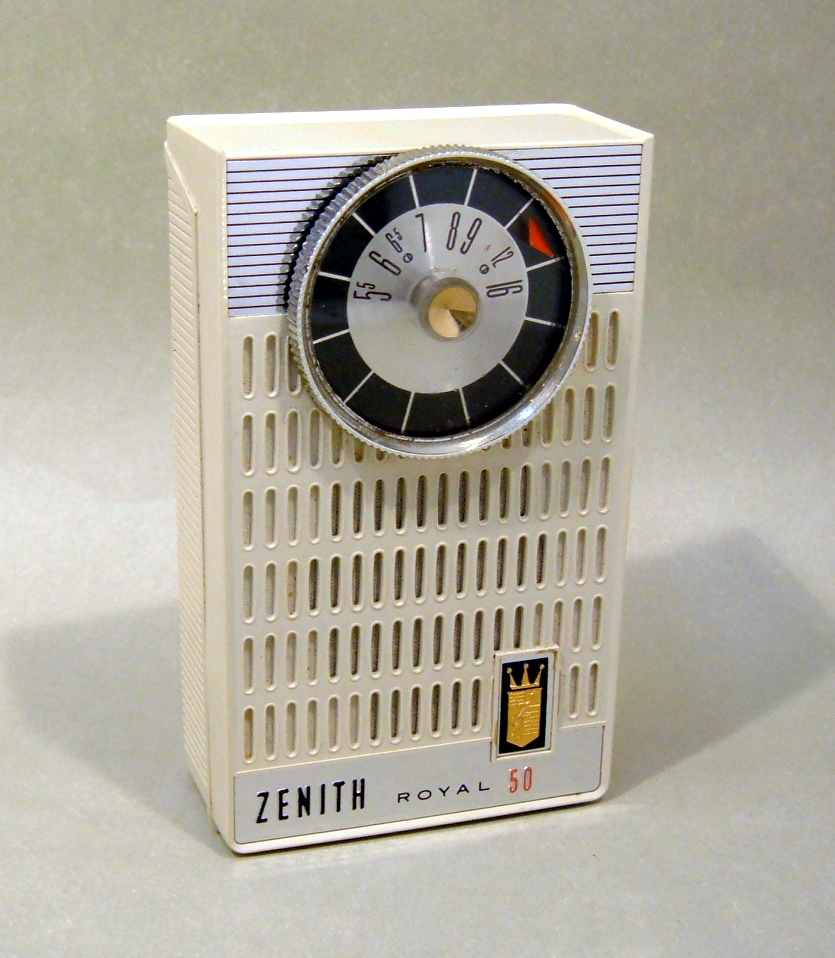 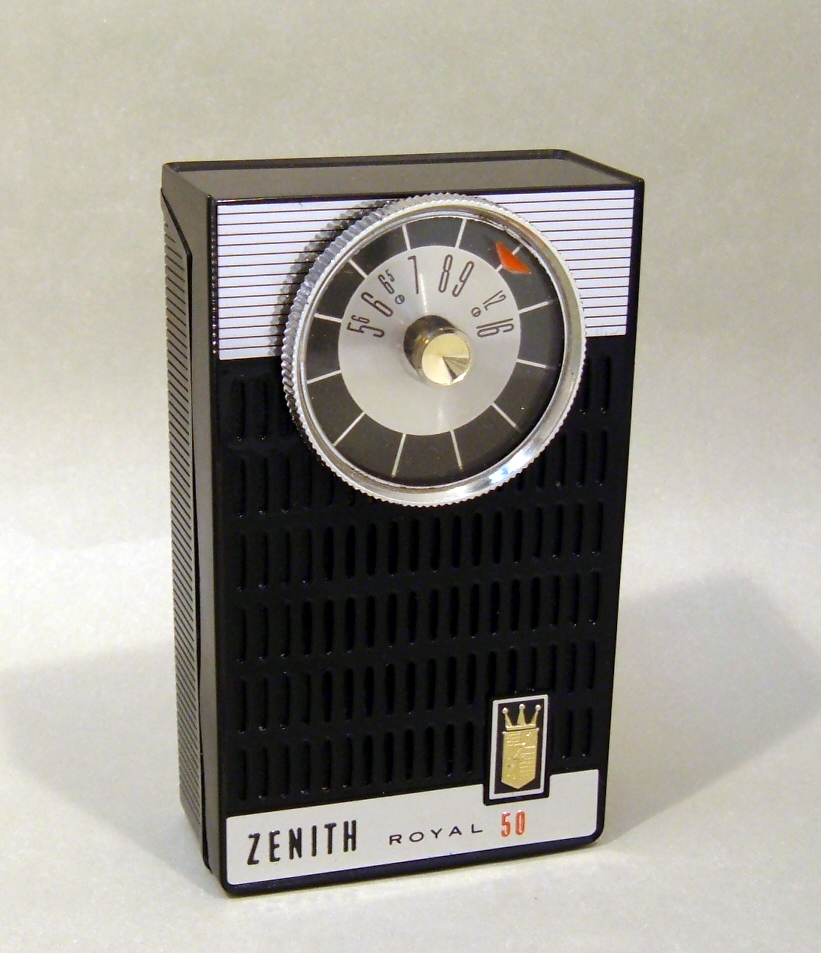 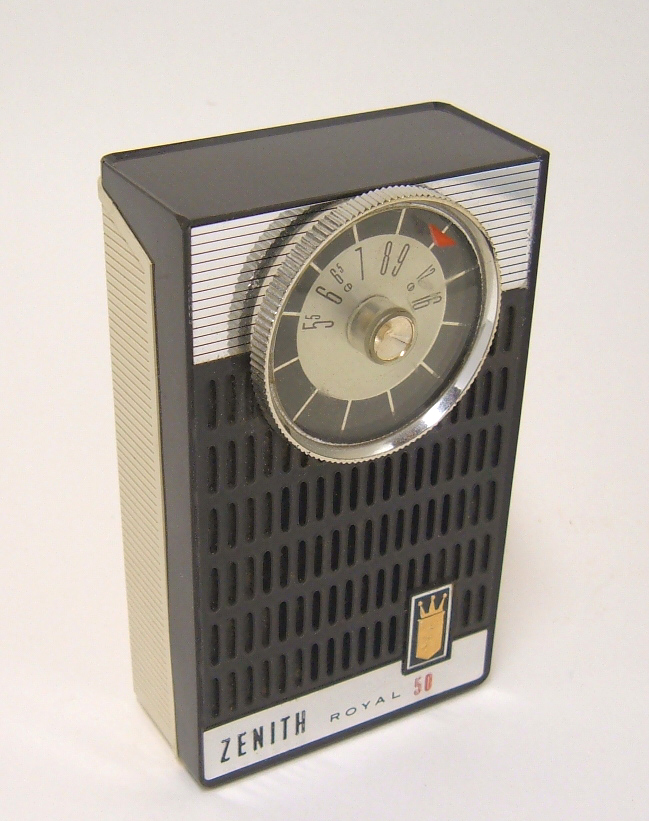 There is also a model 50K which looks the same that was offered in 1962.  The inside label is different but on the outside the only difference is they all have a white volume knob.

The Royal 50L – Introduced in 1962 the 50L featured a recessed tuning dial so the stations would not change when placed in your pocket.  It has an attractive reverse painted black face and brilliant metal grill.  These were offered in four colors:  Yellow and Black with a gold grill, and Red and Turquoise with silver grills.  Due to the stiff competition, the suggested price continued to drop and was $19.95 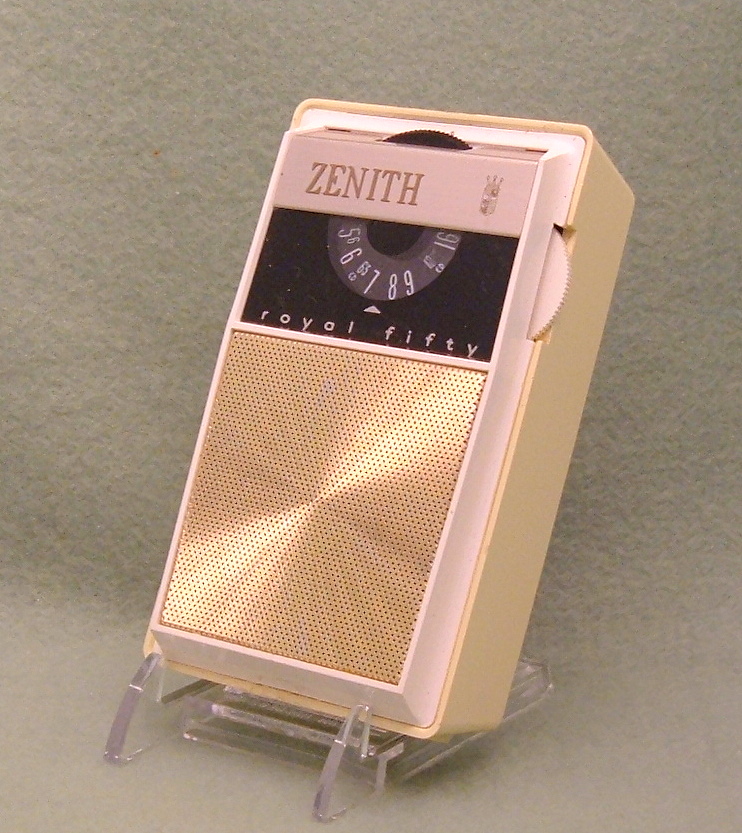 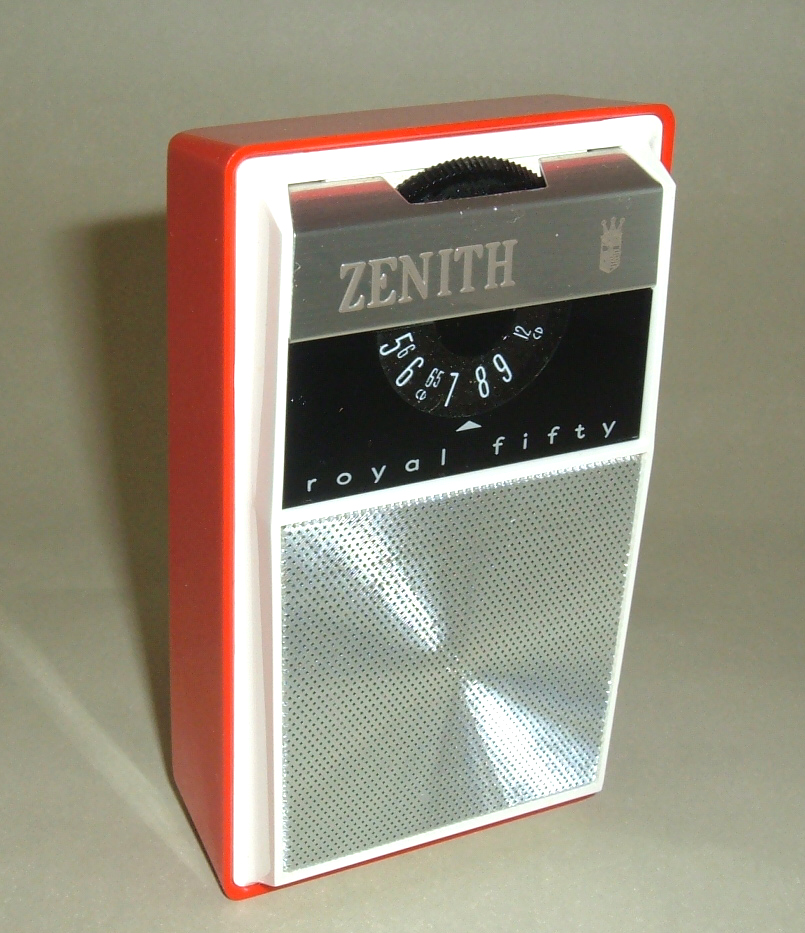 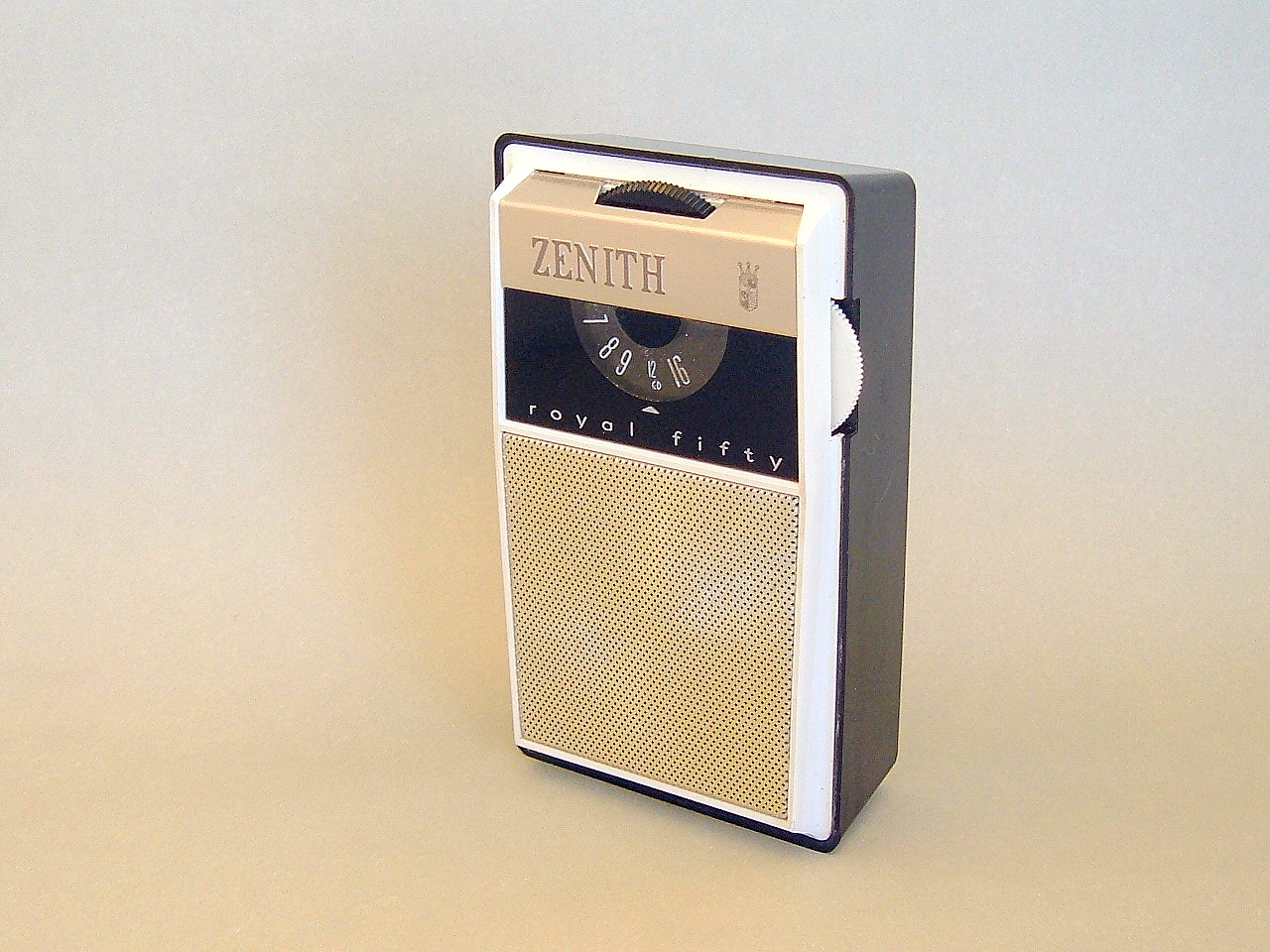 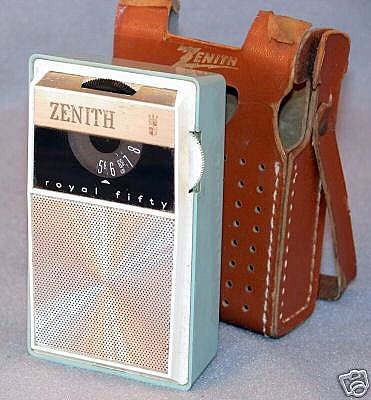 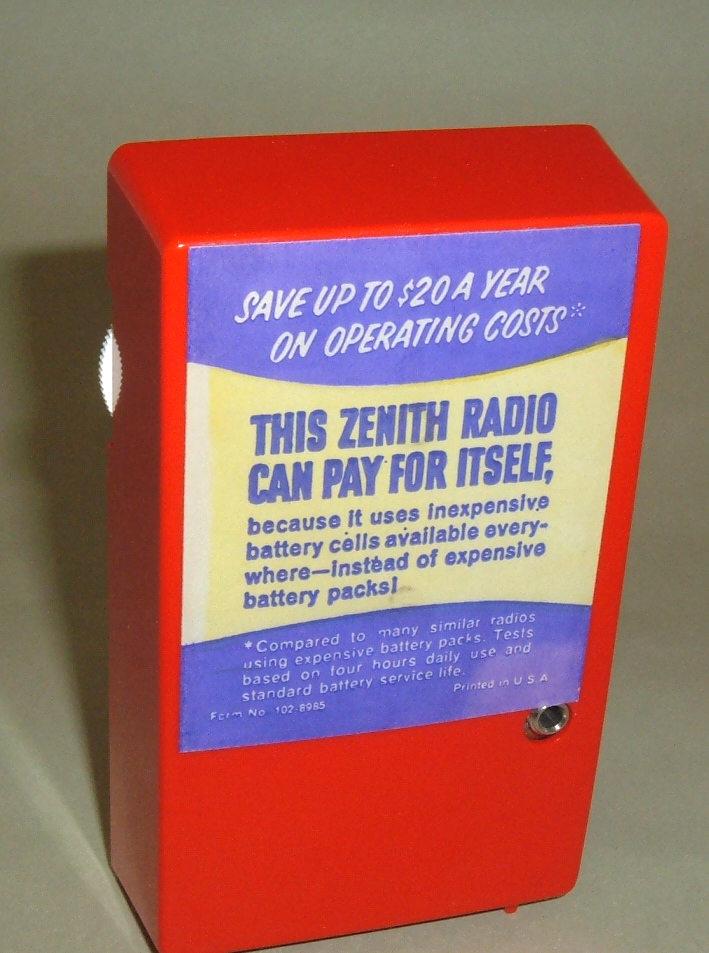 Because of their styling and performance, Royal 50 remained a popular choice of collectors today.  However, with the increasing competition from overseas and the constant introduction of new pocket-sized radios, this series had a much shorter production run than it’s big brother the Royal 500.

During the early 1960’s, Zenith continued to produce some other styles of shirt pocket sized transistors that were manufactured in the USA up until 1965.

The Royal 59 – The family continued into 1965 with the introduction of the Royal 59. A similar sized set, this one had 8 transistors and packed a punch. It’s beautiful grill and smart circular dial make it quite attractive as well.  It was offered in three color combinations.  Even with the additional two transistors, the suggested price was still under $20.00 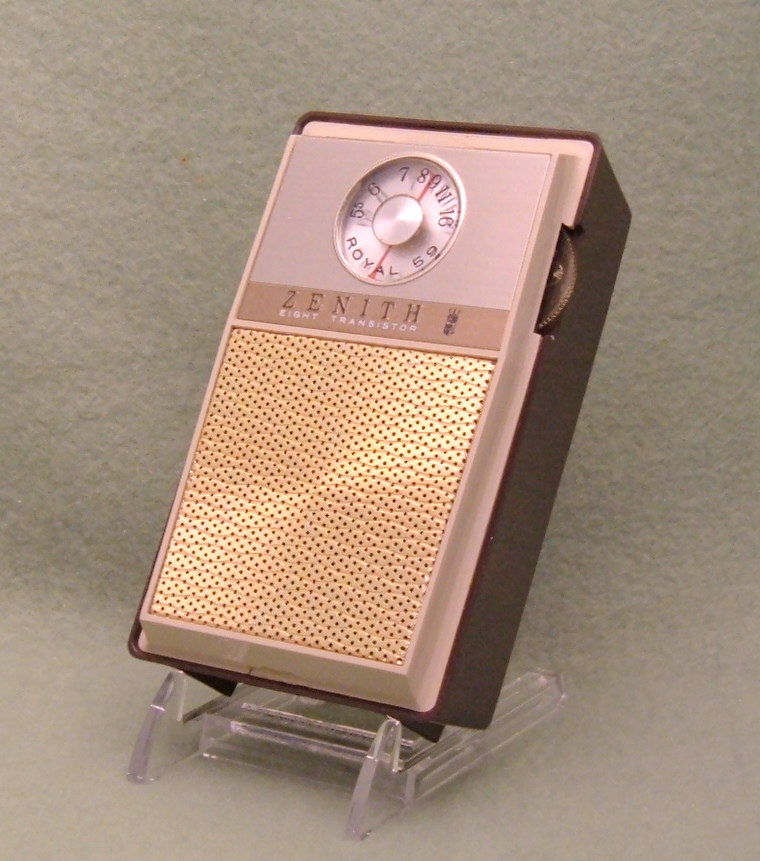 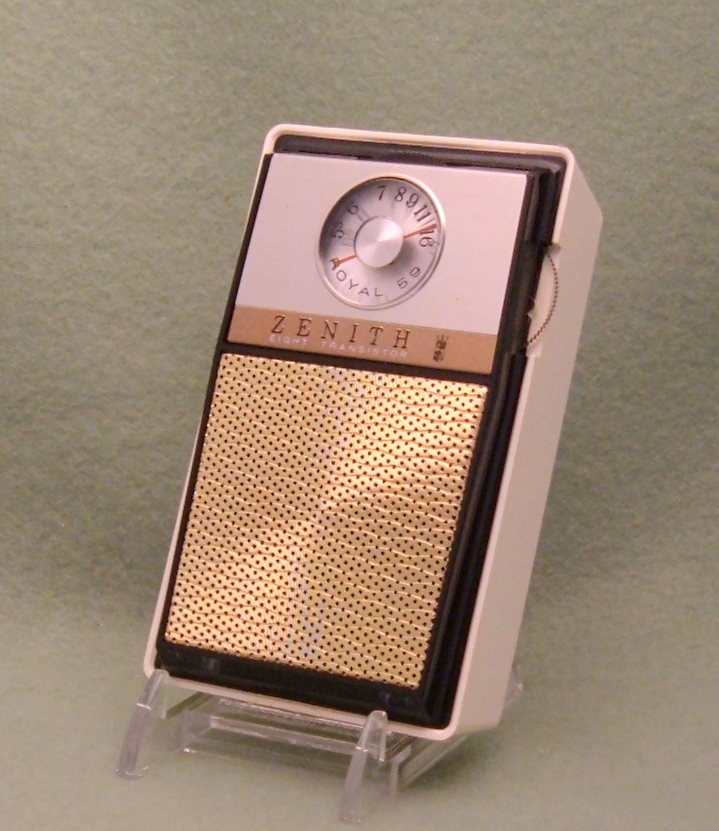 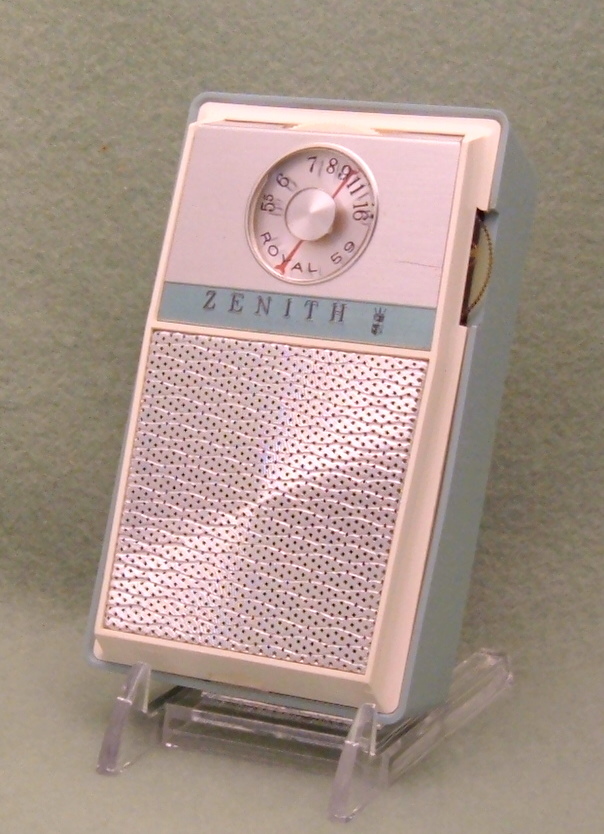 The Royal 40 – Introduced in 1963, this 6 transistor set was just a less expensive version of the Royal 50 with painted trim instead of metal.  Same great performance as the Royal 50 family sets. 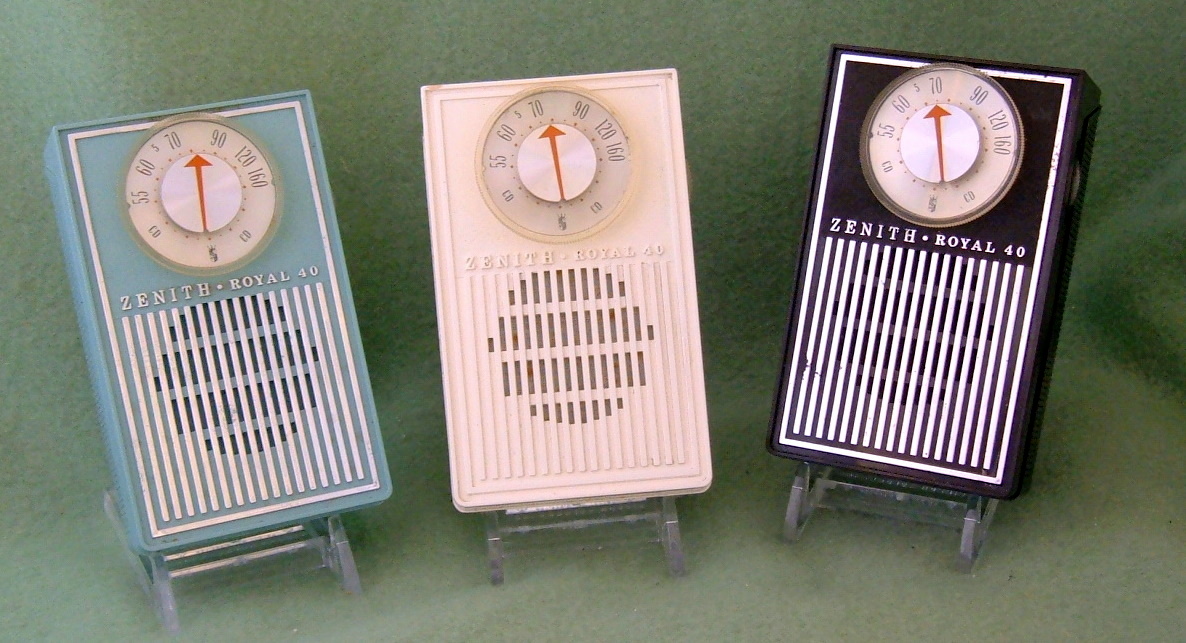 The Royal 60 – 1963. Abeautiful and scarce model also with 6 transistors and bright gold grills. 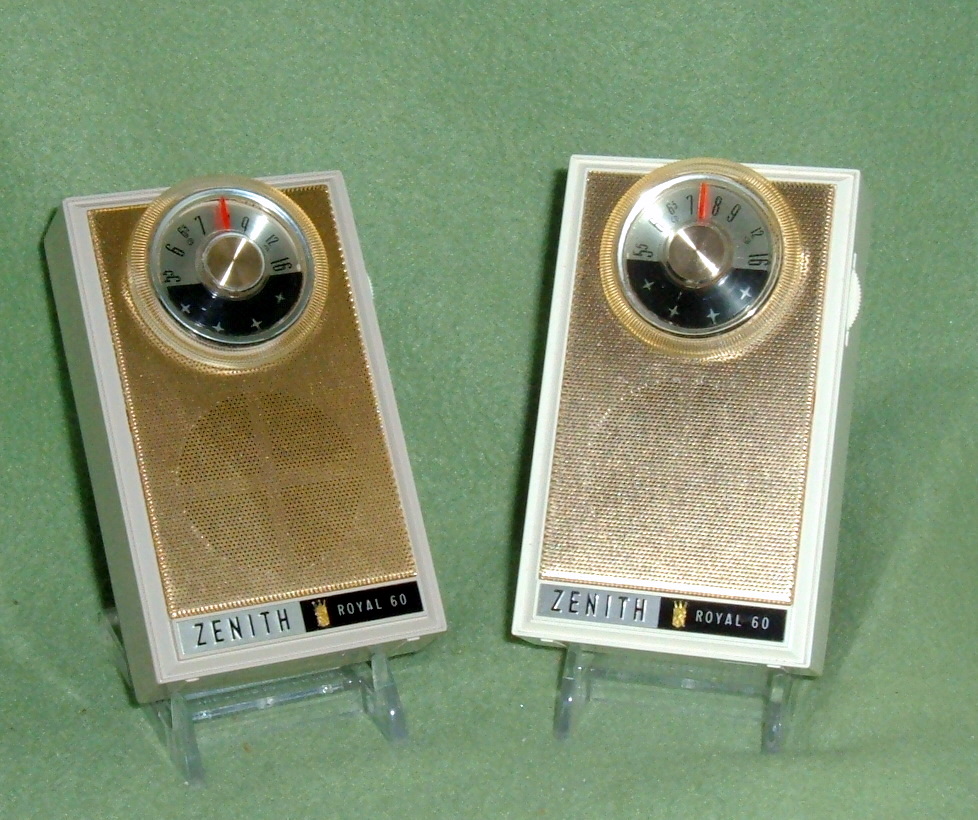 The Royal 90 – Introduced in 1963, this scarce model was offered in orange and also in white.  The unique metal mesh grill is very durable and the 6 transistor chassis is a great performer.  As the other early Zenith shirt pocket radios, this operated on 2 AA batteries and it had a suggested retail price of $21.95. 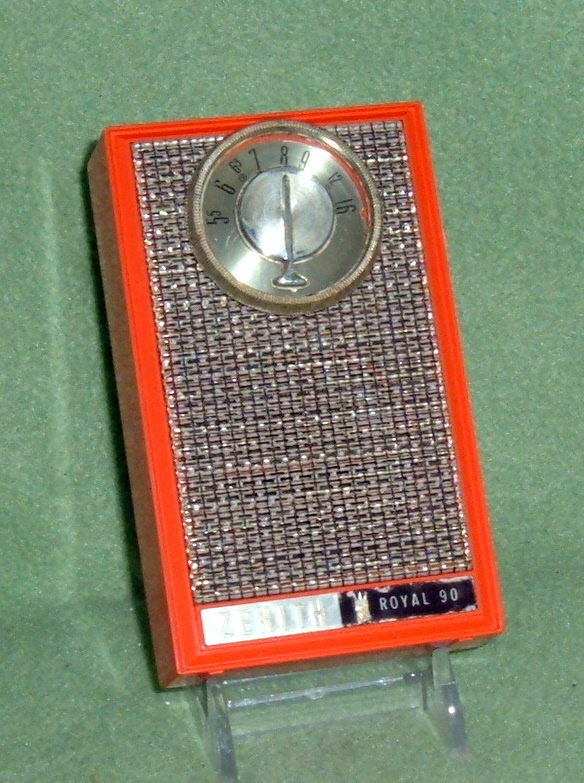 The Royal 125 – 1962 The only shirt pocket with gear-reduced Vernier tuning. 6 transistors.  (My favorite shirt pocket model). The brilliant metal-work on this model makes it a beauty and it was offered in three different color combinations:  Beige and brown, solid charcoal, or try to find one in yellow with a white back. 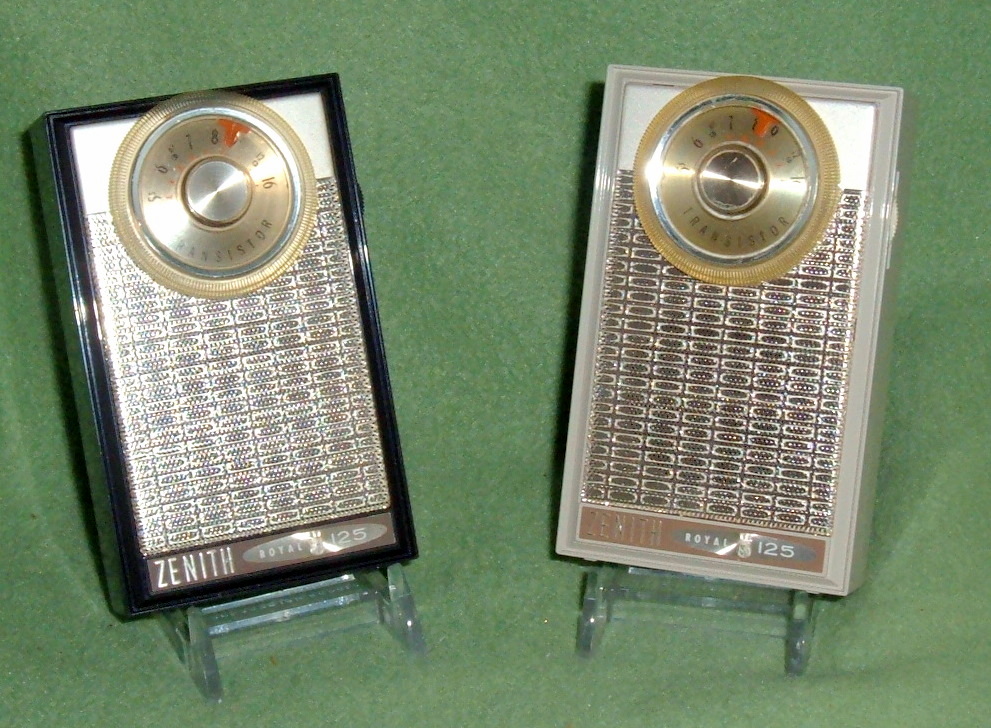 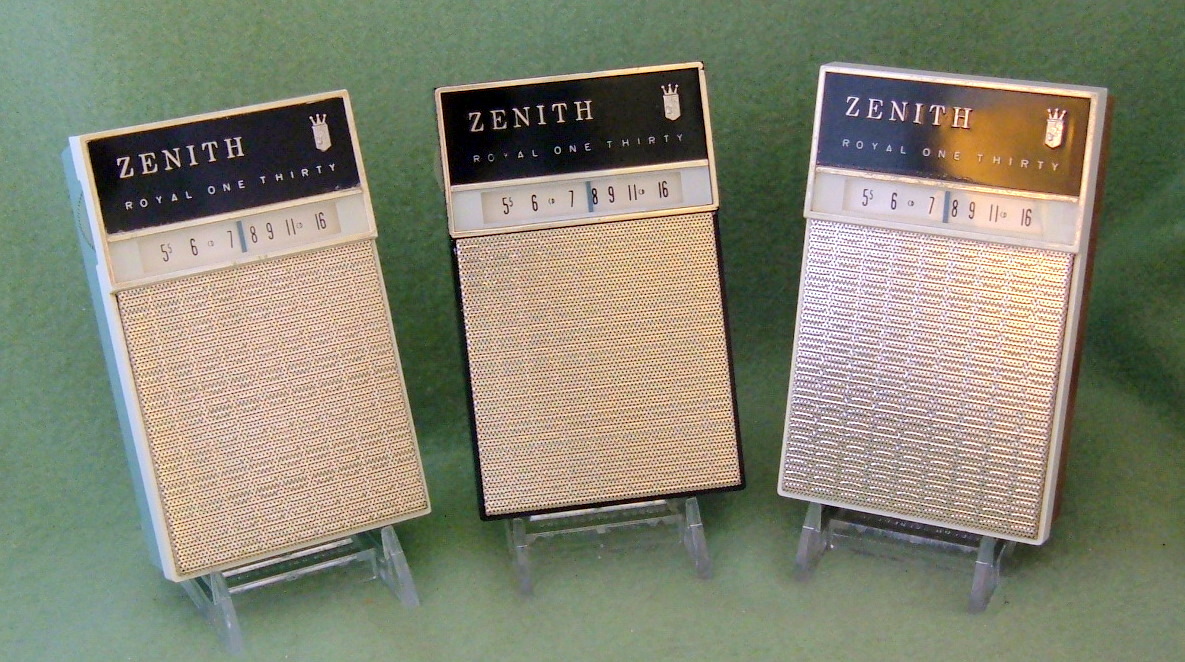 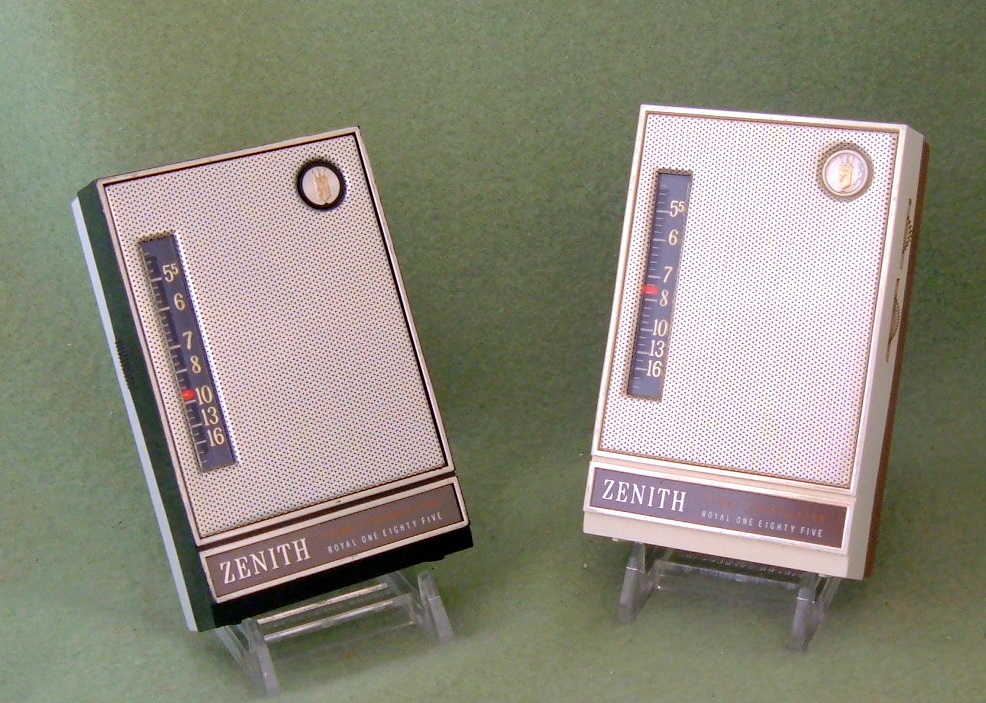 Other later transistors followed as production shifted to Asia.  Here are a few:

The Royal 20 – 1965  This Micro-sized radio was introduced in 1965 to compete with the Standard Micronic Ruby.  The very first ones were made in Chicago but later they were shifted to production in Hong Kong.  8 transistors. 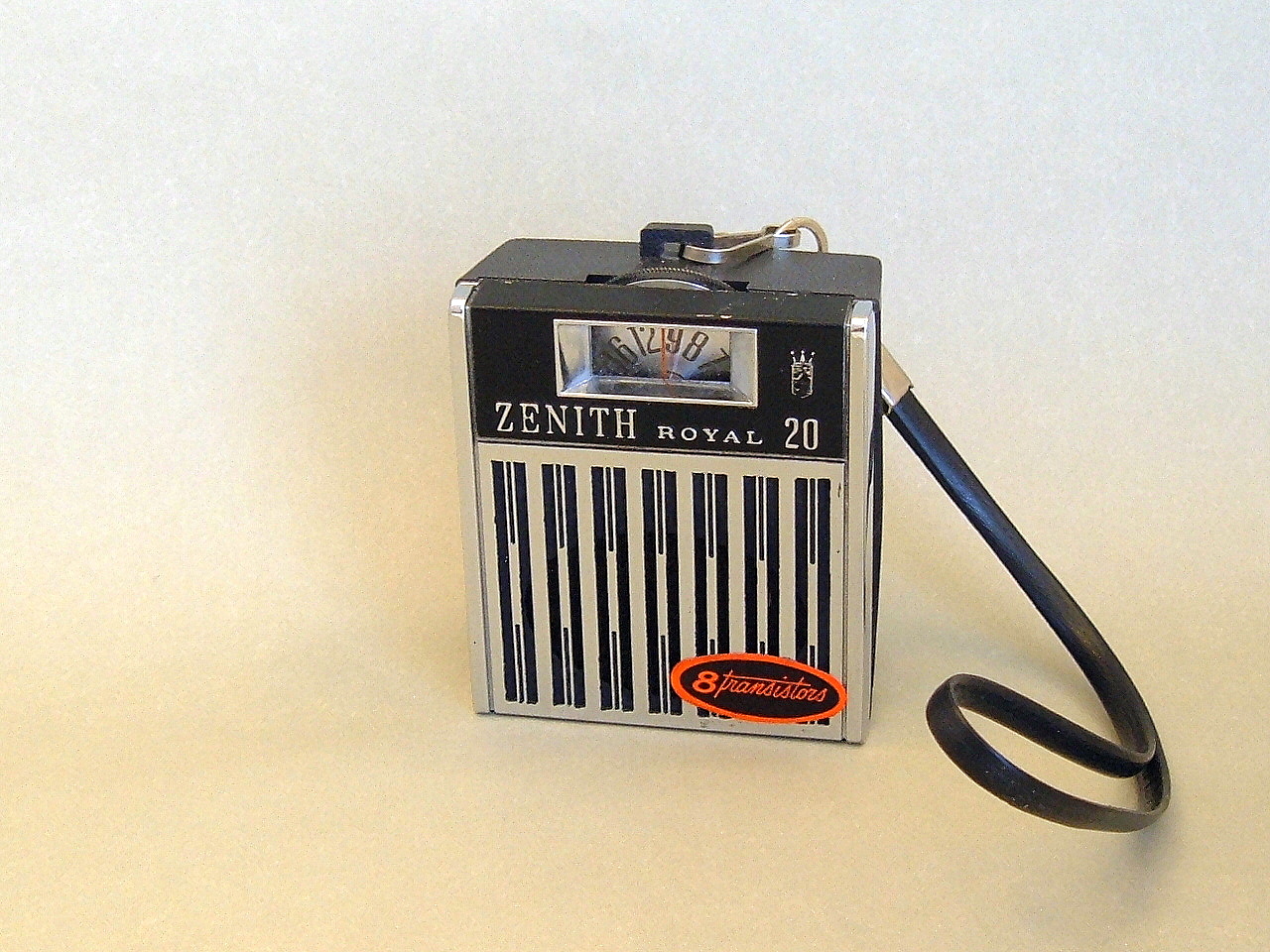 Here is the first pocket radio from Zenith with FM.  This is another quality set and a real handful to hold.  This 9 transistor packs a punch on 4 AA batteries. Very durable set.

The Royal 25-1 This was Zenith’s first shirt pocket with FM. Introduced in 1966 and made in Hong Kong, it has 8 transistors and operates on a 9 volt battery. 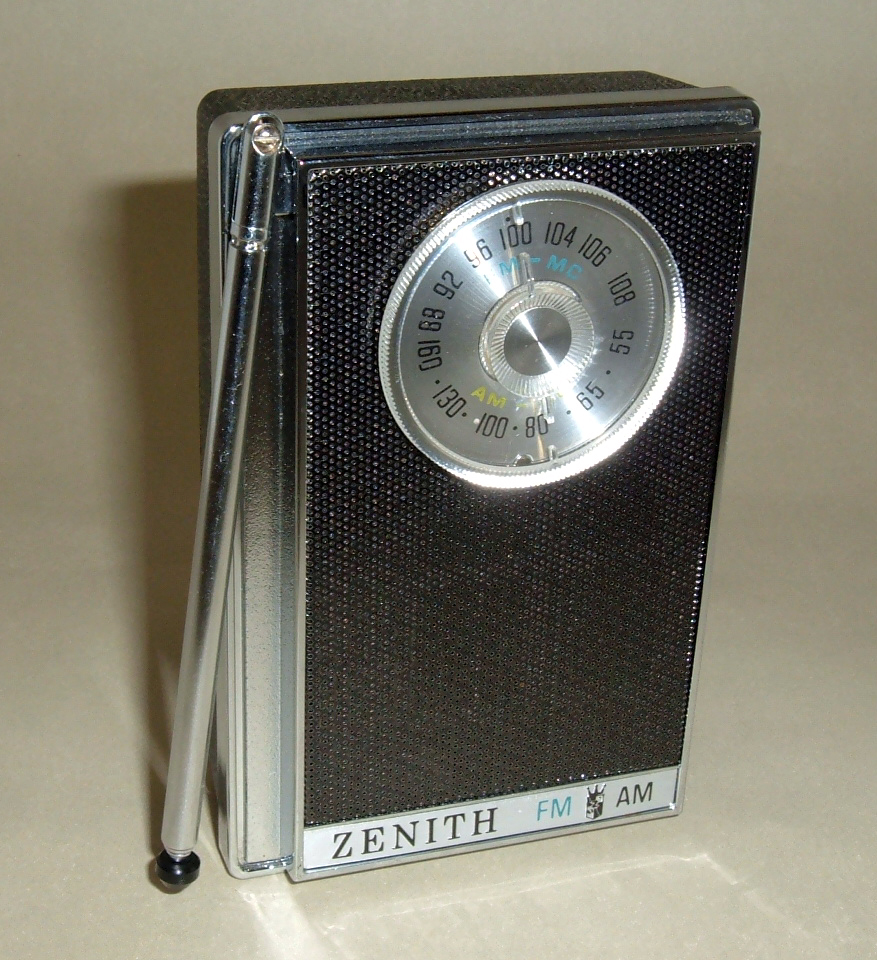 Check out these other Shirt Pocket sized Zeniths radios.